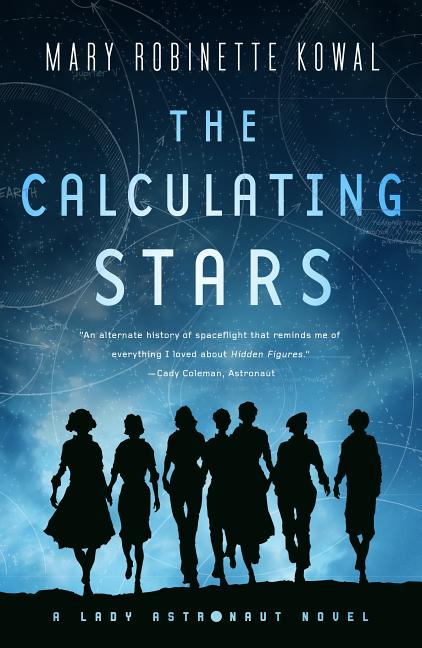 This looming threat from a meteorite that fell to earth and obliterated much of the east coast...calls for a radically accelerated effort to colonize space, and requires a much larger share of humanity to take part in the process. 2019 Nebula Award winner.

What The Reviewers Say
Positive Tom Shippey,
Wall Street Journal
Ms. Kowal’s heroine, Elma, is a wartime ferry pilot and also a crack number-cruncher—just what’s needed. But this is the 1950s. The Calculating Stars traces Elma’s progress through astronaut training, but her real struggle is for acceptance in a world where woman = homemaker ... This is what NASA never had, a heroine with attitude.
Read Full Review >>
Rave Biz Hyzy,
Booklist Online
...a meteorite strikes Earth, causing a global cataclysm. The eastern coast of the U.S. crumbles, and the rest of the world faces a climate shift. A former WASP pilot and mathematician, Elma York works for the International Aerospace Coalition...expediting efforts to colonize other planets. Kowal once again strikes a fine balance of integrating historical accuracy—including mid-twentieth-century sexism, racism, and technology—with speculative storytelling. Readers will root for Elma as she breaks barriers and calculates lifesaving equations, all while dealing with sometimes-crippling anxiety. Recommend to fans of realistic sf.
Read Full Review >>
Mixed Adrienne Martini,
Locus
In the novelette, we meet the Lady Astronaut in question, Elma York, already on Mars and nearing the end of her life. The Calculating Stars, the first of two books, takes us to the beginning of her space career. It opens in March 1952, moments before a comet crashes into the Eastern seaboard and changes everything ... The Calculating Stars occasionally feels like a preflight checklist, where we have to make sure we know about, say, Elma’s experience learning about the structure of racism and bias, just so the theme is adequately explored. It can feel manipulative rather than organically motivated ... Still, there are more scenes that fire on all cylinders than those that feel performative. The back third of The Calculating Stars is both intellectually and emotionally satisfying – and nicely sets up The Fated Sky, which is the second half of Elma’s story.
Read Full Review >>
See All Reviews >>
SIMILAR BOOKS
Fantasy

Piranesi
Susanna Clarke
Rave
What did you think of The Calculating Stars?
© LitHub | Privacy