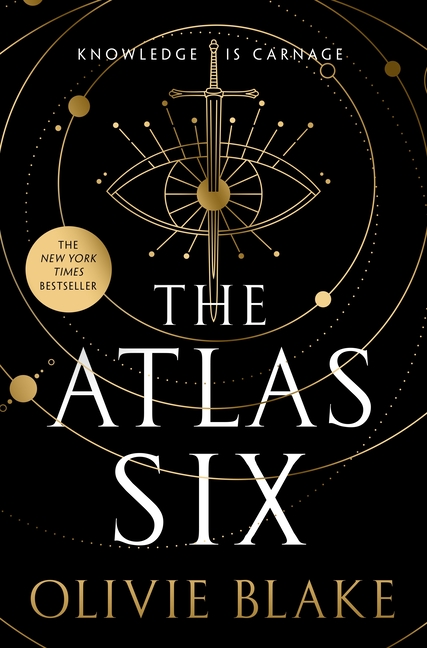 A novel that became a self-publishing sensation has now been released as the first in a series about The Alexandrian Society, caretakers of lost knowledge from the greatest civilizations of antiquity. Each decade, only the six most talented magicians are selected to be considered for initiation—but one among them will be eliminated after a grueling process. Enter the latest class of six, who will fight to survive the next year of their lives.

What The Reviewers Say
Rave Lacy Baugher Milas,
Paste
The Atlas Six is actually just as good as everyone online said it was ... a dense, complicated story that’s heavy on the character work and light on the plot until the last third or so of the novel kicks things into incredibly high gear, you’ll spend a lot of time simply hanging out with these characters and digging into what makes them tick. As a writer, Blake is wonderfully stingy with her exposition ... Her characterizations are rich and thorough—none of the six are especially good people or even likable most of the time. (In fact, several of them are kind of huge jerks!) They all make selfish choices and often downright dumb decisions. But, the emotional underpinnings of their various behaviors have been so carefully laid out throughout the story that it makes their mistakes, if not wise, at least understandable ... The Atlas Six doesn’t offer us any easy answers, but it certainly is an enjoyable ride.
Read Full Review >>
Positive Noah Fram,
BookPage
For a book with such a melodramatic premise...The Atlas Six is curiously matter-of-fact, dispensing with on-page relationship drama and coasting through tense fight scenes with brevity. Likewise, instead of providing flowing backstory, Blake communicates personalities through lighthearted conversations and depicts the world outside the Library’s magically warded walls entirely through the scars it left on her protagonists. The Atlas Six is stingy with its exposition, with the lengthiest passages being debates between characters on topics such as the nature of time and the conservation of magical energy. But in Blake’s hands, these tracts are engaging and often very, very funny. This duality—an extremely pulpy plot married with smart and nimble writing—is the core of The Atlas Six’s appeal.
Read Full Review >>
Mixed Molly Templeton,
Tor.com
The strangest thing about The Atlas Six is that when I talk about it—when I think about it and read about it and search out interviews with the author—everything appeals. Give me mysterious societies with magical libraries! Give me bickering twentysomethings striving for greatness and power and debating what power means and is worth! ... The elements are in place. But for me, the math is off. Partly, it’s that it feels a bit like a very long prologue. This is scene-setting and background, banter and bickering, seductions and exploration. If you click with the writing and the characters, there’s plenty to luxuriate in. But the writing is tuned to a very specific key, and it’s one that doesn’t sing for everyone. The sometimes overwrought prose is notably dialogue-heavy, and that dialogue is described with a whole army of verbs ... The novel’s finale turns many things topsy-turvy with a game-changing reveal that requires a lot of explanation in this book, and probably a lot more in the next. Frustrations aside, I am curious to see how Blake pulls it off ... The Atlas Six is full of ideas and concepts that—like some of the potential initiates of the Alexandrian Society—may be just dying to get out.
Read Full Review >>
See All Reviews >>
SIMILAR BOOKS
Coming Soon

The World We Make
N. K. Jemisin
Positive
What did you think of The Atlas Six?
© LitHub | Privacy