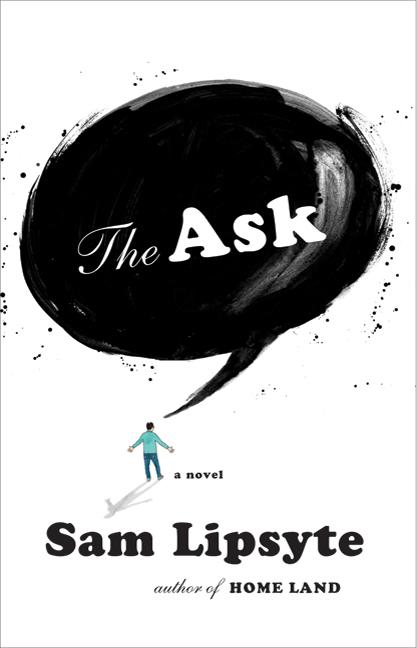 In this novel by the author of Home Land, Milo Burke is a recently unemployed development officer at a third-tier university who has a chance to reclaim his job by scoring a deal with a major donor—his sinister former college classmate who has mysteriously requested Milo's involvement.

What The Reviewers Say
Rave Lydia Millet,
The New York Times Book Review
Sam Lipsyte’s third novel, The Ask, is a dark and jaded beast—the sort of book that, if it were an animal, would be a lumbering, hairy, crypto­zoological ape-man with a near-crippling case of elephantiasis. That’s not to say The Ask isn’t well hewn, funny or sophisticated, because in fact it’s all three ... Lipsyte is not only a smooth sentence-maker, he’s also a gifted critic of power ... there’s a rotten joy in Milo’s shenanigans despite his personal joylessness, a kind of delicious pleasure, with only a hint of rancidness, that accretes to us in his miserable ­wallowing ... What makes The Ask work so well is the way it dovetails its characters’ self-loathing with their self-consciousness. For instead of making its characters blind...it gives them 20-20 vision but endows them with perfect impotence ... And that’s why this book is a success: not only the belly laughs but also the sadness attendant upon the cultural failure it describes. There’s a genuine disappointment visible through the cynic’s jibes—the grief that comes with the end of empire and the collapse of an ideal.
Read Full Review >>
Rave Geoff Dyer,
The Guardian
Basically, the more style you have, the less plot you need. So if it takes little time to sketch the plot of Sam Lipsyte's The Ask, that's a backhanded way of saying it's a stylistic tour de force ... what a ride it is. We're pinned back in our seats by the prose's headlong momentum; we're craning forward to see what's coming next ... The Ask is full of amazing swerves in diction, sudden ascents and plunging descents in register (in the space of a page, and often in a single sentence); it affords breathtaking views of the social landscape of 'late capitalism' ... There are strong traces, here and elsewhere—especially in the dialogue—of Don DeLillo. Lipsyte has absorbed DeLillo's concept of the novel as neon essay, dialogue as deadpan rhythm section, character as discursive figment of the real. That's why the aforementioned roller coaster [of prose] is all the time curling back on itself, offering vertiginous glimpses of its own construction, the stuff from which it is made: the American language ... the comparison that demands to be made is with Martin Amis's Money: there's a similar intensity and voltage to the language, the same vaulting confidence in the ability of the pyrotechnic monologue to fix a historical moment.
Read Full Review >>
Rave Glen Weldon,
NPR
... sentences you can bounce a quarter off of; pleasantly shaggy plotting that makes only a dutiful nod toward the notion of narrative urgency; and jokes. Good ones, that land ... You can count on Lipsyte to sculpt sentences of muscular prose loaded with solid, old-fashioned gags, and thank God for that. He's determined that the comic novel must be comical, not simply humorous. Not for him, that now-pandemic species of light, supercilious literary irony that inspires in the reader a knowing smirk. Lipsyte aims instead for the gut laugh of rueful recognition ... Lipsyte's language is beautifully crafted stuff, yes, but he employs it in service to a larger, coherent purpose that makes his many narrative digressions worth the detour ... It's biting stuff, but there's heart here, too, especially in Lipsyte's depiction of the relationship between Milo and his young son Bernie. There's heart, but not schmaltz ... What's singular about the novel—what inspires the laughter of rueful recognition, page after page—is the sharply observed way Lipsyte shows us a man so like our ordinary, unheroic selves: A man who doesn't so much triumph over adversity as find a way to broker a deal with it
Read Full Review >>
See All Reviews >>
SIMILAR BOOKS
Coming Soon

The Harpy
Megan Hunter
Positive
What did you think of The Ask?
© LitHub | Privacy