The Apartment on Calle Uruguay 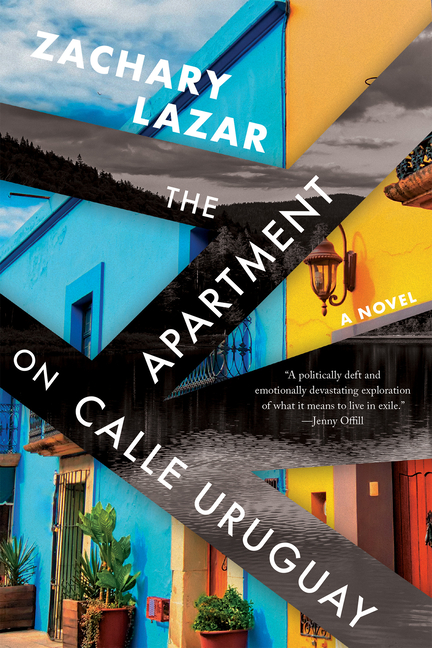 The story of Christopher Bell, a blocked painter on the East End of Long Island, and Ana Ramirez, a journalist who fled the crisis in Venezuela and is looking for work in New York. Bell has always felt marked by his foreignness, having emigrated to the U.S. as a child, and has come to believe that words like 'identity' and 'American' are somehow very meaningful and very meaningless at the same time. He has retreated to a modest house near a patch of woods, where he encounters Ana, who is trying to reinvent herself as the kind of person she'd been before the world she knew disappeared. A complicated romance develops that gradually reveals their buried histories.

What The Reviewers Say
Rave Dinaw Mengestu,
New York Times Book Review
A novel often vested more in describing the world through his perspective than in any conventions of plot ... This isn’t to say that things don’t happen in Lazar’s novel ... There’s an interesting tension between Christopher’s interior state and the political reality that surrounds him, one made even more complicated by a narrative style that consciously — one might even say adamantly — eschews explicit drama in favor of a more lyrical and often abstract mode of expression ... The type of withholding that Lazar employs has little to do with restraint or uncertainty, much less a desire to build dramatic tension out of missing information ... Facts, however, offer little in terms of clarity or resolution on the characters’ internal lives and their attachments to one another. Seemingly stable truths are some of the very things the narrator sets out to disturb ... Mystifying and deliberately ambiguous ... At its best, Lazar’s withholding seems to be a much-needed defense of ambiguity and the beautiful complexity that comes with it ... There are obvious challenges to that narrative approach ... It’s a risk that I imagine Lazar was keenly aware of in constructing a narrative voice that is attuned to not only the larger political contexts of our lives but also the gulfs separating many of us from them. Christopher, for all of his limitations, engages seriously with the possibility that the meaning we hope to find in the often competing and sometimes discordant layers of facts and images surrounding us is, in the end, unlikely and random — the same quality that renders his story at once mysterious, frustrating, tragic and, yes, sublime.
Read Full Review >>
Rave Sophie Poole,
BOMB Magazine
Lazar’s Calle Uruguay reckons with the period and its impact on our national imaginaries, making it something of a historical novel despite its immediacy ... When everything seems to be spinning out of control, when Bell can no longer bring order to his disorderly world, he returns to abstract, visual expression. At a time that feels increasingly difficult to recognize, the imagistic world becomes a retreat that offers a familiar, if unintentional, estrangement from the chaos. The book hurtles forward, propelled by this chaos, but ultimately ends up precisely where Bell began: with art as a redeeming and reorienting practice during difficult times.
Read Full Review >>
Rave JOHN DOMINI,
The Los Angeles Times
... [a] fine paradox of a novel ... The crisp sensuality of the rhetoric isn’t new. From the first, the prose bristles with such nuggets, including scrumptious food writing. Still, here the narrator asserts a new forthrightness: the gumption to quit hiding and licking his wounds ... Lazar’s delay in explaining the title proves canny, heightening the tension that percolates beneath his evasions and digressions. It makes for suspense at once ingenious and compelling, rooted in a sympathy that both illuminates terrifying recesses and extends its healing touch across a pair of troubled continents.
Read Full Review >>
See All Reviews >>
SIMILAR BOOKS
Coming Soon

Victory City
Salman Rushdie
Rave
What did you think of The Apartment on Calle Uruguay?
© LitHub | Privacy