Springfield Confidential: Jokes, Secrets, and Outright Lies from a Lifetime Writing for the Simpsons 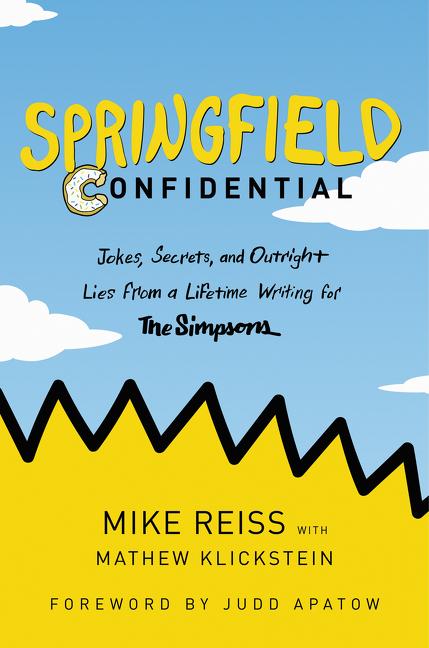 From a producer who has been with The Simpsons since its inception in 1989, this volume offers an inside look into the longest-running scripted prime-time show in television history, with insights into characters, episodes, and professional relationships.

What The Reviewers Say
Rave Michael Cavna,
The Washington Post
Mike Reiss pulls back the curtain in his new book, cheekily titled Springfield Confidential. Cheeky, because as a behind-the-scenes peek at a long-running Hollywood production, this is no kiss-and-tell tome. Even at its most dishy, it is closer to a sketch-and-kvetch. Yet don’t let that dissuade you, because Springfield Confidential—a title that nods, of course, to the Simpsons’ unmappable home town—offers a wealth of great anecdotes, all peppered with punchlines that make Reiss’s memoir as hilarious as whichever season of The Simpsons you recall most fondly.
Read Full Review >>
Rave David Pitt,
Booklist
In this always entertaining and frequently laugh-out-loud-hilarious memoir, Reiss and coauthor Klickstein take us behind the scenes not only of the long-running sitcom, but also of Reiss’ own life ... There have been a lot of books written about The Simpsons, some of them good but most not so much, and this is hands down one of the very best.
Read Full Review >>
Mixed Jack Hamilton,
Slate
It’s the first book of its kind by a true Simpsons lifer and offers an informative, frequently hilarious, and occasionally frustrating glimpse into the long career of the world’s most famous four-fingered family ... Reiss’ book is stuffed with jokes, many of which are really funny: About two-thirds of the way through, there’s one at the expense of Moe, my favorite Simpsons character, that made me laugh out loud in public. But it never feels like Reiss fully settles on what sort of book he’s trying to write, a behind-the-scenes tour of an iconic show or a personal memoir of a life in comedy writing, with the latter often feeling a bit half-assed ... Springfield Confidential works best as fan service, and I don’t mean that as a dig. Reiss knows his audience, and it’s unlikely that many people will read this book who aren’t already Simpsons obsessives ... Reiss does briefly address the ongoing controversy over the voicing of Apu and does so defensively and poorly ... Mike Reiss wrote the goddamn Simpsons. It can be up to the rest of us to write the great books that the show deserves.
Read Full Review >>
See All Reviews >>
SIMILAR BOOKS
Biography

My Girls
Todd Fisher
Positive
What did you think of Springfield Confidential: Jokes, Secrets, and Outright Lies from a Lifetime Writing for the Simpsons?
© LitHub | Privacy