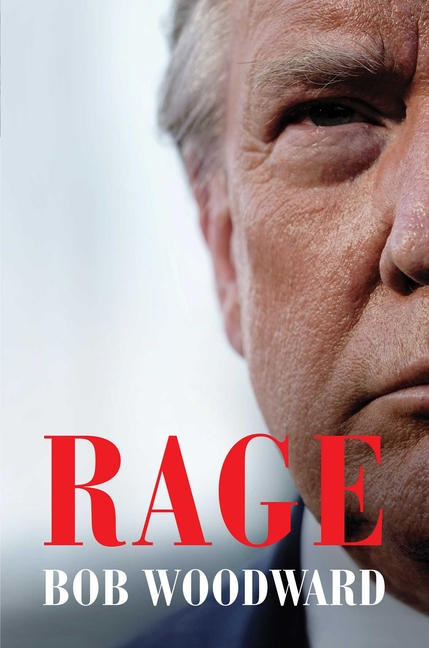 The renowned journalist follows his exploration of the Trump administration begun in Fear with this latest volume, which includes 17 on-the-record conversations with Trump himself.

What The Reviewers Say
Mixed Rosa Brooks,
The Washington Post
... we knew all this already, didn’t we? ... Rage offers some fresh details and confirmation of old assumptions, but little that is likely to surprise anyone or change any minds. These incidents have lost their power to shock. What makes the book noteworthy is Woodward’s sad and subtle documentation of the ego, cowardice and self-delusion that, over and over, lead intelligent people to remain silent in the face of Trumpian outrages ... Rage was written in a hurry, and at times it shows ... Still, Woodward’s prose offers readers that delicious, vicarious sense of being an insider, right there in the room with Bob, a witness to presidential sulks and boasts ... If Rage breaks little ground, Woodward nonetheless eventually becomes the favored recipient of the ultimate nugget of Trumpian philosophy ... ''Want to know something? Everything’s mine. You know, everything is mine.'
Read Full Review >>
Mixed Stephen Rohde,
Los Angeles Review of Books
... despite his 49 years reporting on Washington politics, 19 previous books, and two Pulitzer Prizes, Woodward comes off...as surprisingly naïve ... These are painful chapters to read that will elicit rage in many readers. The willful blindness from which [administration officials] each suffered in accepting Trump’s appointments, and their failure to blow the whistle once they witnessed firsthand the damage Trump was causing our country, entitles each to his own chapter when Profiles in Complicity is written ... 'Even people who believe in him somehow believe in him without believing what he says.' That is the baffling reality of Trump’s presidency ... Woodward offers no analysis here, so readers are left to dwell on the tragedy of it all ... Woodward, a daily newspaper reporter at heart, moves from one story to the next, spending little or no time offering any incisive analysis of these enablers ... Rage provides additional firsthand evidence that since taking office Trump has posed a 'clear and present danger' to the people of the United States and beyond ... Judging Rage on its own terms, the book is an important contribution to documenting the Trump presidency. Woodward is adept at getting people to trust him and talk on the record, including Trump himself.
Read Full Review >>
Pan Jennifer Szalai,
The New York Times
Readers who pick up Bob Woodward’s new book, Rage, and are tantalized by the promise on its dust jacket of 'an utterly vivid window into Trump’s mind,' will quickly get schooled in a lesson that apartment hunters in New York often have to learn: A window can be only so vivid if it looks out onto an air shaft ... The Trump that emerges in Rage is impetuous and self-aggrandizing—in other words, immediately recognizable to anyone paying even the minimal amount of attention ... One half of Rage reads like...a typical Woodwardian narrative of very serious men soberly doing their duty, trying their darnedest to keep the president focused and on message ... So far, so tedious. Enter Trump ... Woodward ends Rage by delivering his grave verdict ... It’s an anticlimactic declaration that could surprise no one other than maybe Bob Woodward.
Read Full Review >>
See All Reviews >>
What did you think of Rage?
© LitHub | Privacy