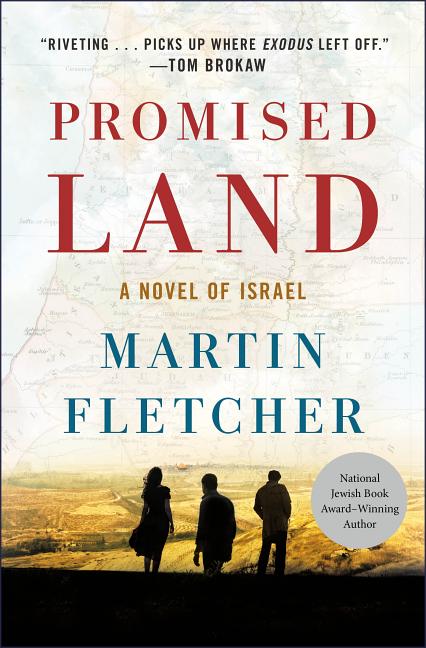 Two German Jewish brothers who lost their family in the Holocaust are driven apart by their love of the same woman in the fledgling state of Israel.

What The Reviewers Say
Rave Philip K. Jason,
Washington Independent Review of Books
Martin Fletcher’s Promised Land is a literary triumph of near-contemporary historical fiction that is magnetic, surprising, and should be read and enjoyed for decades to come. The scope of the book runs from 1950, shortly after Israel’s establishment as a modern nation, to 1967, a time of its most severe testing ... The author is clearly a great admirer of Israel, but he is not blind to issues that burst the bubble of unqualified boosterism. A case in point here is the inclusion of material suggesting that Israel too often provokes the Palestinians into taking hostile, deadly action for the sole purpose of being able to justify an overpowering response. Such a response might have the end goal of resetting borders. In scope, vividness, and the representation of complex, intertwined forces, Fletcher’s book is a candidate for the highest acclaim: 'masterpiece' fits. I’m hoping for a sequel that reaches through the last third of the 20th century. As I did with Leon Uris’ Exodus, I also await the movie.
Read Full Review >>
Rave Martin Fletcher,
Historical Novel Society
Promised Land is a sweeping novel of personal and national evolution within Israel as it attempts to forge its respectable, permanent place in the local, national and international communities. Readers will immediately become engaged in this memorable, well-crafted work of historical fiction.
Read Full Review >>
Positive Jen Baker,
Booklist
This historical family saga, first of a planned trilogy, invites inevitable comparison with Leon Uris’ Exodus, the action picking up in 1950, directly after the historical events Uris depicts. Fletcher, however, focuses more on characters than on Israel’s history as the protagonists’ personal perspectives bring the interwar period (between WWII and the Six-Day War) to life ... Fletcher, well known for his National Jewish Book Award–winning Walking Israel, and for his character-driven novels, knows his subject and dramatizes it to great effect.
Read Full Review >>
See All Reviews >>
SIMILAR BOOKS
Fiction

The Forger's Daughter
Bradford Morrow
Rave
What did you think of Promised Land?
© LitHub | Privacy