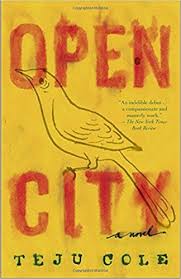 What The Reviewers Say
Positive Michiko Kakutani,
The New York Times Book Review
The narrator of Teju Cole’s odd, sometimes striking, sometimes frustrating first novel is a med student named Julius who likes to wander through the streets of New York City, and the book is filled with arresting, strobe-lit glimpses of Manhattan, 'this strangest of islands' ...his glimpses of the city turn out to be fragments in a meandering stream-of-consciousness narrative that often reads like an ungainly mash-up of W. G. Sebald’s work and the Camus novel L’Etranger ...the author’s gift for portraiture, but other, more perfunctory exchanges with strangers have a solipsistic, dreamlike quality, as though these people were simply projections of Julius’s own sense of dislocation ...Mr. Cole’s failure to dramatize his alienation — or make it emblematic of some larger historical experience, as Sebald did with his displaced characters — impedes the reader’s progress while underscoring the messy, almost ad hoc nature of the overall narrative.
Read Full Review >>
Rave Kaya Genç,
The Los Angeles Review of Books
...Open City is a more mature work, or seems so given the self-confidence of the book’s narrator ... Here the narrator takes his time, describing different paths available to the city wanderer instead of writing about the one he has taken. Drawing the topography of New York City, he creates a space for the reader ... In Open City we inhabit post-9/11 New York as if we are left alone there to wander at will ...gives rise to an important question, one that Julius has been probing from the very beginning of the book: how much can the observer penetrate the depths of what he observes? ... In Open City, Julius, and his creator Cole, can be said to reach it, although some may prefer the imperfect sketches to the perfect painting.
Read Full Review >>
Positive James Wood,
The New Yorker
This busy campaign for allies does a disfavor to Teju Cole’s beautiful, subtle, and, finally, original novel. Open City is indeed largely set in a multiracial New York (the open city of the title) ... the novel does move in the shadow of W. G. Sebald’s work. While Open City has nominally separate chapters, it has the form and atmosphere of a text written in a single, unbroken paragraph: though people speak and occasionally converse, this speech is not marked by quotation marks, dashes, or paragraph breaks and is formally indistinguishable from the narrator’s own language ...Cole has made his novel as close to a diary as a novel can get, with room for reflection, autobiography, stasis, and repetition ... More than anything, Open City seems a beautifully modulated description of a certain kind of solitary liberalism common to thousands, if not millions, of bookish types.
Read Full Review >>
See All Reviews >>
SIMILAR BOOKS
Fiction