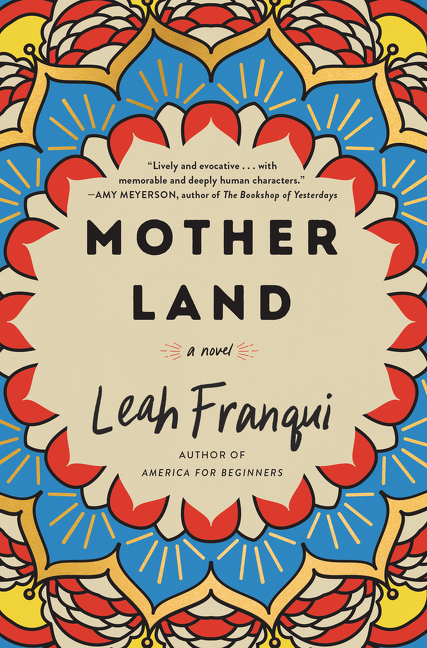 When Rachel Meyer, a thirtysomething foodie from New York, agrees to move to Mumbai with her Indian-born husband, Dhruv, she knows some culture shock is inevitable. But the ex-pat American's sense of adventure is sorely tested when her mother-in-law, Swati, suddenly arrives from Kolkata alone, with an even more shocking announcement: she's left her husband of more than forty years and is moving in with them.

What The Reviewers Say
Positive Chika Gujarathi,
BookPage
...Franqui resurrects the age-old struggle between mother-in-law and daughter-in-law—and topples it with a spot-on exploration of what it means to stand up against other people’s expectations ... Mother Land is unexpected. It’s funny and relatable even if your mother-in-law isn’t anything like Swati. It’s a tender tale of two women who are lost and alone, but who eventually become allies and each other’s biggest champions.
Read Full Review >>
Positive Sarah Schroeder,
The Washington Independent Review of Books
The everyday challenges faced by Rachel, a main character in Leah Franqui’s second novel, Mother Land, may resonate with anyone who has spent considerable time in a new country or even in a new community ... Franqui, herself an American woman living in Mumbai with her Indian husband, takes a risk by alternating between Rachel’s perspective and Swati’s each time she starts a new chapter. This technique allows the author to illustrate the significant gap between Swati’s worldview and Rachel’s, though a reader who shares Swati’s Marwari heritage — and, to be clear, this reader does not — may not find all of Swati’s inner monologues entirely plausible ... The novel is a quick read, driven by a plot that will pique readers’ curiosity about how Rachel and Swati’s disagreements, large and small, will resolve ... Despite the inviting plot, however, some of the passages that describe Rachel’s and Swati’s thoughts and rumination drag, as they do not always serve to impart wisdom or advance the narrative. Still, Mother Land is a pleasant story of self-discovery and friendship with plenty of twists and intrigue to keep the reader engaged.
Read Full Review >>
Positive Susan Blumberg-Kason,
Asian Review of Books
Franqui doesn’t demonize either Indian customs or American ones ... Franqui’s fictionalized experiences serve as cautionary tales for those hoping that a place or a person will change their lives—as well as for women with mother-in-law issues.
Read Full Review >>
See All Reviews >>
SIMILAR BOOKS
Coming Soon

The Last Karankawas
Kimberly Garza
Rave
What did you think of Mother Land?
© LitHub | Privacy