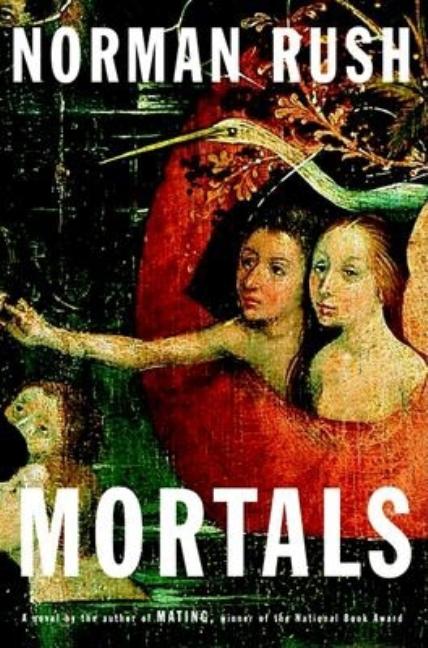 Mortals chronicles the misadventures of three ex-pat Americans: Ray Finch, a contract CIA agent, operating undercover as an English instructor in a private school, who is setting out on perhaps his most difficult assignment; his beautiful but slightly foolish and disaffected wife, Iris, with whom he is obsessively in love; and Davis Morel, an iconoclastic black holistic physician, who is on a personal mission to “lift the yoke of Christian belief from Africa.”

What The Reviewers Say
Rave John Homans,
New York Magazine
Rush, who won the National Book Award for Mating, in 1991, has written a book that’s its equal, with a wonderful balance between the interlocking arcs of its plot ... Part of the privilege—and the burden, of course—of being an American is the complexity of this moral position, power being exerted in your name, learning how to live with it, or not. There’s no one writing who shows more insight into this question than Rush—and it’s never been a more interesting question ... Another quality that makes his books so charged is that Rush doesn’t shrink from describing the inequality and distortions of sexual relationships ... Implausible as some of the plot developments seem to be, Rush’s amazing rendering obviates the need for suspension of disbelief.
Read Full Review >>
Positive HUGO BARNACLE,
The Times (UK)
Rush is subtle, and never quite owns up to his comic intent. The whole thing is told with a straight face ... Neither is the humour ever unkind. Ray’s absurd complaisance as a husband is shown to be part of his decent, philosophical outlook ... Although Iris is clearly a major irritant, we are compelled to see her through Ray’s eyes and recognise her problems as well as his ... The fine detail of the African setting, the spy shenanigans and the interplay between the large cast of characters make the novel well worthwhile, provided you have a long enough while to spare.
Read Full Review >>
Mixed Adam Mars-Jones,
The Guardian (UK)
Norman Rush's Mortals is serious and well written, but it operates on a scale that only blazing genius could justify. I've read and enjoyed every word, but my bond with the book felt mildly unhealthy, like the literary equivalent of Stockholm Syndrome, based less on the free play of literary pleasure than being separated for so long from other stimuli ... The book may be sophisticated as a piece of writing, but it's a relatively primitive example of construction. The reader becomes very familiar with Ray's mind, and no one else's ... The novel hardly notices its own slow transformation into a sort of action thriller. Crisis and deprivation send ripples across Ray's mental life, but the turbulence is minimal.
Read Full Review >>
See All Reviews >>
SIMILAR BOOKS
Coming Soon

The Last Karankawas
Kimberly Garza
Rave
What did you think of Mortals?
© LitHub | Privacy