Master of the Senate: The Years of Lyndon Johnson 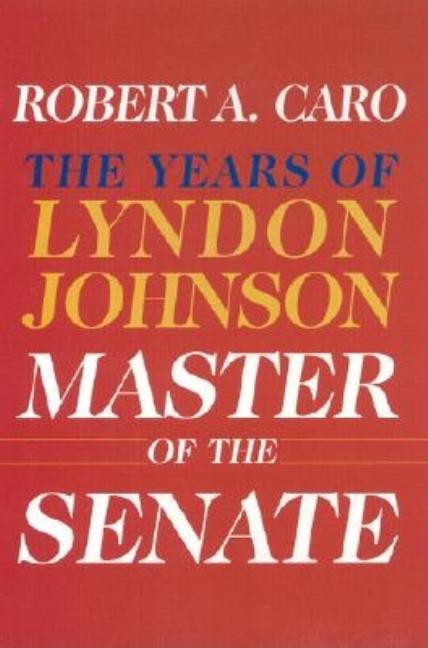 Master of the Senate, Book Three of The Years of Lyndon Johnson, carries Johnson’s story through one of its most remarkable periods: his twelve years, from 1949 to 1960, in the United States Senate. At the heart of the book is its unprecedented revelation of how legislative power works in America, how the Senate works, and how Johnson, in his ascent to the presidency, mastered the Senate as no political leader before him had ever done.

What The Reviewers Say
Rave Antony Lewis,
The New York Times Book Review
Johnson's magic is the main subject of this book ... It makes a wonderful, a glorious tale. The book reads like a Trollope novel, but not even Trollope explored the ambitions and the gullibilities of men as deliciously as Robert Caro does. I laughed often as I read. And even though I knew what the outcome of a particular episode would be, I followed Caro's account of it with excitement. I went back over chapters to make sure I had not missed a word ... It is 12 years since Means of Ascent, and Caro has used that time not only for gathering facts with incredible industry but, evidently, for reflection. The result is a more rounded Lyndon Johnson. We get him warts and all -- plenty of warts -but also with admiring recognition of his accomplishments ... Johnson made the impossible happen. Caro's description of how he did it is masterly ... The tragedy of Lyndon Johnson came when he found that he could not run the world. The Vietnamese would not yield to his persuasion or his power ... That story is for a future volume of Robert Caro's biography. It will be hard to equal this amazing book.
Read Full Review >>
Mixed https://www.theatlantic.com/magazine/archive/2002/07/fatal-attraction/302549/,
The Atlantic
Although Caro grudgingly acknowledges Johnson's achievements, the real juice of this book lies in his tales of Johnson's underhanded and self-serving behavior ... Caro is fatally attracted to the kind of man he can hate ... Caro has the strengths of an investigative reporter ... He is a tireless researcher and has a nose for the neglected detail and the buried story. But he also has an investigative reporter's weaknesses: a determination to 'get the goods' on his subject ... There is a lot of heavy breathing and grasping of the reader's lapels in his books ... Caro's writing can also be overwrought. His work groans under self-consciously novelistic or scene-setting devices ... Both in treatment and in subject this book is twice as long as it should be. It would have benefited considerably from some ruthless editing ... In focusing so relentlessly on Johnson's ambition, Caro often loses track of Johnson as a human being ... After three volumes and some 2,500 pages of text, Caro has still not been able to capture Johnson's complexity.
Read Full Review >>
Rave William Hague,
The Telegraph
...it is Caro's great achievement that in more than 1,000 pages contained in this volume he has massively extended his work on Lyndon Johnson without in any way diluting its quality ... To me this book stands out because it brings that pace and drama to life: it makes it almost as exciting to read the book as it would have been to be there ... Caro's achievement...is not only vividly to tell the story of one remarkable man. It is also to explain with clarity the lives of the people he worked with, the history of the institutions in which he exercised his power, and the deep social forces which moved those people and institutions to action. When a fourth volume finally completes the set, this will be nothing short of a magnificent history of 20th-century America.
Read Full Review >>
See All Reviews >>
SIMILAR BOOKS
Biography

The Trials of Harry S. Truman: The Extraordinary…
Jeffrey Frank
Positive
What did you think of Master of the Senate: The Years of Lyndon Johnson?
© LitHub | Privacy