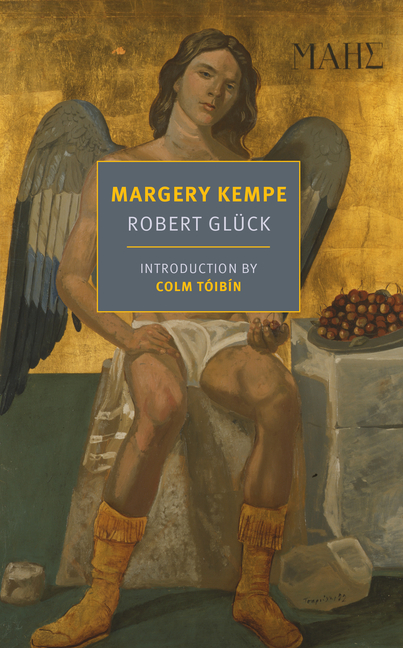 Lust, religious zeal, and heartache come together in this novel about two infatuations, one between a man and his young lover in the late 20th century and another between a 15th-century maiden and Jesus Christ.
Positive
Based on 4 reviews

What The Reviewers Say
Rave Alexander Chee,
Bookforum
Glück’s story about Margery takes her visions and unfolds them, with an immediacy and an erotic power and scale reminiscent of Giorgio Vasari’s stunning mural on the inside of the Santa Maria del Fiore Cathedral in Florence. It is like falling upward into a long dream about sex and Jesus, in Glück’s hands a spectacle, visceral and sublime ... The two narratives become one, feed each other, much in the way lovers feel they are made possible by the presence of a beloved ... By the end, Margery Kempe felt to me like a mingling of Vita Sackville-West’s biography of Joan of Arc and the sort of pulp gay erotic fiction I found in porn stores in the 1980s—the illustrated covers feathery from years of being held, read, and put down—and yet also somehow firmly within the tradition of any mural on any church or cathedral in Florence. If it’s sacrilege to imagine Jesus as an object of desire, as the first Margery Kempe did, then Glück’s novel has a great deal of company, in both the past and the present.
Read Full Review >>
Positive Daniel Felsenthal,
The Baffler
...Kempe is Glück’s most beautiful work of fiction. Its reissue includes a dry-as-onionskin introduction by éminence grise Colm Tóibín and an inexplicable cover illustration of a Greek winged angel—all of the superficial signs that the heterosexual fiction establishment has decided to acknowledge a literary fag. The novel is followed by a short essay by Glück ... Packaging a reissue like this may be routine, but still it makes me wonder: Why hang Glück’s fiction between two explanations, rather than let his prose speak for itself, with all of the wildness and ambiguity it expressed in 1994? ... The novel stands alone in Glück’s oeuvre, not for its wildness—his lucid, precise descriptions of sex distinguish each of his four volumes of fiction—but for its ambiguity ... The New Narrative embraced the literature of transgression from its beginning, yet Kempe’s shock value was also a response to the squeamish landscape of the late 1980s and 1990s ... Even the tendency of the New Narrative writers to name-drop, to network within the texts themselves, seems a devastatingly relatable acknowledgement of the draconian forces mounting just outside the walls of their mutually supportive literary community. By the time Margery Kempe came into the world, these forces had converged; like so many gay people who came out just before or during the AIDS crisis, the New Narrative discovered itself simultaneously with its own death. Yet its ideas are mutable, which makes them immortal.
Read Full Review >>
Rave Will Hall,
Full Stop
One of the common threads of these works is the intensity and immediacy with which they are able to convey sexual desire in, and through, their avatar-texts. But what remains a puzzle is why articulating desire becomes more, rather than less possible, with so much antiquated language floating around ... In many ways, historical language is the best kind of language for abject desire. When you’re as in love as the 'writers who love too much' are, its crucial to temporize, to bide your time while you give the person you’re obsessed with time to make his or her decision to be with you or not ... Glück uses the form of the declarative sentence towards an end of lyricism and excess. The authenticating detail, paradoxically, suffuses the writing with the hyper-personal, rather than giving it objectivity ... Glück’s literary effects are staked on a playfulness that far exceeds the pleasures of high-low.
Read Full Review >>
See All Reviews >>
SIMILAR BOOKS
Coming Soon

The Last Karankawas
Kimberly Garza
Rave
What did you think of Margery Kempe?
© LitHub | Privacy