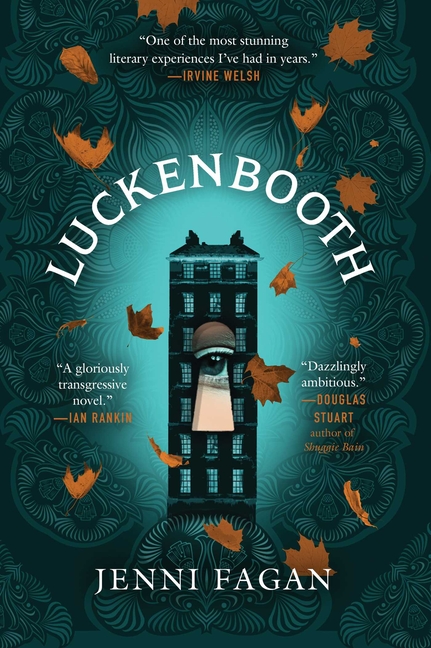 Over nine decades in Edinburgh, 10 Luckenbooth Close bears witness to emblems of a changing world outside its walls. An infamous madam, a spy, a famous Beat poet, a coal miner who fears daylight, a psychic: these are some of the residents whose lives are plagued by the building's troubled history in disparate, sometimes chilling ways as the horrible truth of the building's secrets make their way out.

What The Reviewers Say
Rave Lauren Beukes,
The New York Times Book Review
... a cabinet of curiosities that is both a love letter to the Scottish capital, and a knife to its throat ... Fagan...has a ferocious empathy for her ootlins [outsider characters] and their struggles in a society that rejects and oppresses them ... Occasionally, her characters feel slightly too modern in their thinking, too prescient of the world to come ... like all the characters, Burroughs is so richly drawn, so enjoyable to be with, that you can forgive the authorial slips. Certainly, it’s not ahistorical to believe that society’s outcasts had a keen understanding of how they’ve had to make their own ways of being, find their own ways to be seen ... the author...shifts between these voices with fevered joy, taking us through a host of characters who are all extravagant, wild and wounded at heart ... Filled with blistering social critique, Luckenbooth is an ambitious and ravishing novel that will haunt me long after. Stories can be like a house, somewhere you can inhabit for a while. The best kind leave behind a room inside you.
Read Full Review >>
Rave Ron Charles,
The Washington Post
... deliciously weird ... Fagan once again examines the way people are affected by unhealthy spaces ... she writes about placement and displacement with an arresting mix of insight and passion ... Fagan tests each floor of No. 10 Luckenbooth as though she’s playing a literary version of Jenga, drawing out one block after another from this unstable structure ... a muffled scream—with a feral melody and a thundering bass line. Her prose has never been more cinematic. This story’s inexorable acceleration and its crafty use of suggestion and elision demonstrate the special effects that the best writers can brew up without a single line of Hollywood software—just paper, ink and ghosts.
Read Full Review >>
Rave M. John Harrison,
The Guardian (UK)
From the start, Luckenbooth gives the feel of a legend or fairy story ... A multistorey horror story reveals itself obliquely in fragments across a number of years and viewpoints, weirdly paced, the action rushed and breathless, generalised, then freezing for a moment on an unexpected scene or event. It’s like the speech of an excited child; but you soon discover that the perspective is much, much more experienced than your own ... Fagan’s booth of stories—her Cornell box of frenzies, tragedies and delights—offers the present moment in the endless war between love and capital. It’s brilliant.
Read Full Review >>
See All Reviews >>
SIMILAR BOOKS
Fiction

The Confessions of Frannie Langton
Sara Collins
Rave
What did you think of Luckenbooth?
© LitHub | Privacy