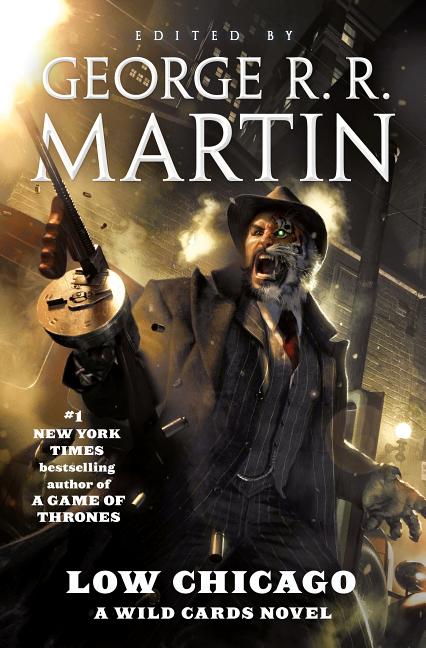 In Low Chicago, a gang of criminals scattered throughout the past threaten the stability of the world in George R. R. Martin's latest Wild Cards adventure.

What The Reviewers Say
Mixed Alan Keep,
Booklist Online
The Wild Cards universe, in which an alien virus created the superpowered 'aces' and the physically mutated 'jokers' alike, is no stranger to bizarre and astounding phenomena ... Low Chicago weaves a story that travels from the neat present to the troubled 1968 Democratic convention to 1920s gangland and even Chicago’s prehistoric past. The twenty-fifth Wild Cards novel should not only satisfy long-time fans of the series but also provide newcomers to it an engaging and exciting entry into its world.
Read Full Review >>
Positive Kirkus
A genre-hopping, time-jumping, crowd-pleasing chain novel under the curation of old master Martin, he of Game of Thrones fame ... Low Chicago is a card game, but it’s also a fine description of the demimonde-haunting characters who turn up at the Palmer House at the beginning of this octoauthorial extravaganza. ... Is it sci-fi? A viral thriller? Yes and no, and while not for every taste, a pleasure for the experimentally minded.
Read Full Review >>
Positive Publishers
Explores an alternate history where an alien virus accidentally released in 1946 transforms its survivors into supervillainous jokers, superheroic aces, or a combination thereof, eight authors introduce a new wrinkle: time travel ... An accident during a high-stakes poker game leaves many of its participants—including shape-shifting assassin Lilith, half-tiger bodyguard Khan, and power-mimicking Abigail—stranded in various moments in Chicago’s past ... Longtime fans will enjoy surprise appearances by previous notables, sometimes in drastically altered circumstances, and this entry also works well as a standalone. It’s a treat for any fan of superhero stories.
Read Full Review >>
See All Reviews >>
SIMILAR BOOKS
Fantasy

The Memory of Souls
Jenn Lyons
Positive
What did you think of Low Chicago: A Wild Cards Novel?
© LitHub | Privacy