King and Emperor: A New Life of Charlemagne 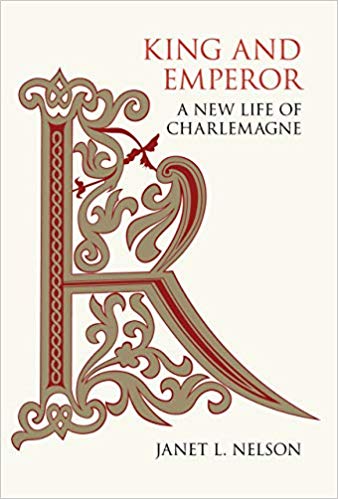 Charles I, often known as Charlemagne, is one of the most extraordinary figures ever to rule an empire. Driven by unremitting physical energy and intellectual curiosity, he was a man of many parts, a warlord and conqueror, a judge, a defender of the Latin Church, a man of flesh and blood. In the twelve centuries since his death, warfare, accident, vermin, and the elements have destroyed much of the writing on his rule, but a remarkable amount has survived. Janet Nelson's new book brings together everything we know about Charles I, sifting through the available evidence, literary and material, to paint a vivid portrait of the man and his motives.

What The Reviewers Say
Rave David Bates,
The Financial Times (UK)
...Janet Nelson has succeeded in delivering 'a new life' of Charles. Her long-awaited biography invites us to understand the man in ways that are original and penetrating. She claims that 'more of Charles’s personality can be known than meets the eye' and illustrates this by setting out in detail both the influences that shaped policy and practice, and anecdotes that illuminate intimate aspects of personality and character ... Rigorous assessments of difficult evidence are mixed with what feels like invitations to conversation. Their effect is to transport readers away from the eighth and ninth centuries to the 21st — and into quite a few others as well — demonstrating the effectiveness of biography as a means to understand a seemingly remote age, a subject on which Nelson reflects insightfully ... England and Britain were never part of Charles’ empire, and yet they were very much part of the Charlemagne and European stories. This magnificent book brings alive the man at their heart.
Read Full Review >>
Positive David Aaronovitch,
The Times (UK)
...if you like the name Cathwulf, then this is the book for you. My favourites include Ragamfred, Willibrord, Queen Liutperga, Ermenbert of Worms, Duke Toto of Nepi and the scribe Hitherius. All names that seem ready for rediscovery and reuse .... Nelson, emeritus professor of medieval history at King’s College London, would, I think, make a marvellous dinner party neighbour. She understands the era and is romanced by it ... Yet she also clearly sees her subjects as she writes about them, walking around in front of her ... She is happy to make judgments in the case of disputed accounts, to argue with other historians and to try to get the reader to appreciate what is similar and what is so different about that world.
Read Full Review >>
Positive Michael Taube,
The Washington Post
... intriguing ... could serve an important modern role as an intellectual warehouse of ideas for [Charlemagne's] history — and leave existing historical interpretations open to debate ... While most of us aren’t medieval scholars, the challenge of trying to figure out which Charlemagne is the real Charlemagne is enjoyable and intellectually stimulating. Whether Nelson has actually solved the centuries-old mystery isn’t, shall we say, elementary.
Read Full Review >>
See All Reviews >>
SIMILAR BOOKS
Biography

Tecumseh and the Prophet: The Shawnee Brothers W…
Peter Cozzens
Rave
What did you think of King and Emperor: A New Life of Charlemagne?
© LitHub | Privacy