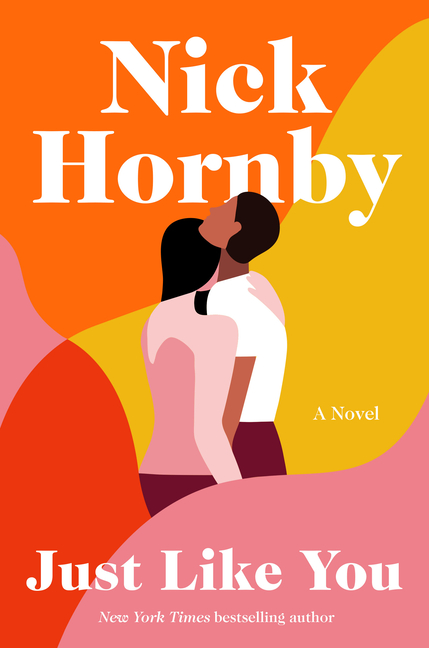 Love in the time of Brexit: A 42-year-old white schoolteacher falls for the 22-year-old, working-class black man, working behind the counter of her local butcher shop.

What The Reviewers Say
Positive Sam Leith,
The Guardian (UK)
In this age of anxiety about cultural appropriation and suchlike, kudos to Nick Hornby’s bold move in Just Like You, He narrates one half of it from the point of view of a working-class black man in his early 20s and the other half from the point of view of a 42-year-old middle-class white mother. And, what’s more, he makes a social comedy of the two of them falling in love, one that gently dramatises their differences of class, race and generation ... By setting most of Just Like You in 2016, what’s more, Hornby stirs in that great exposer of fissures in class, race and generation: the Brexit referendum ... Hornby is surefooted around all these issues, amiable and forgiving ... Does he tell us much that we don’t already know or think we don’t already know? On this I’m not sure. Just Like You – as a comedy of class difference and of the soft racism of bien-pensant liberals – invites comparison with Kiley Reid’s Such a Fun Age and seems to me to lack some of that novel’s sharpness. I don’t think there’s much in here to challenge or discomfit ... But why should there be? It is frequently funny, consistently engaging and it’s not primarily a sociological treatise or a satire: it’s a love story. It may not have fire in its belly, but it has great warmth in its heart.
Read Full Review >>
Positive Joanna Briscoe,
The Guardian (UK)
While Hornby skewers this particular milieu – his home territory – with horrible accuracy, and is truly funny, creating an impressive portrait of the internal life of a woman in her 40s, his attempt to inhabit the point of view of a black man in his 20s sits uneasily. Amid all the unwinnable arguments about who is allowed to write about whom, or from whose viewpoint, this is a brave, well meant if sometimes jarring attempt. The youth-speak alone, the 'pengs' and 'lols', the DJ friend called £Man and girl called Jaz in her spangly top and face glitter seem at best dated, even for 2016 ... But the novel gallops straight into something that is immensely readable, sharp-eyed and at times hilarious ... Hornby pulls off that surprisingly difficult feat: creating genuinely likable protagonists. We are rooting for them throughout, longing for their age-gap, class-gap, interracial relationship to work despite obstacles ... Long discussions about Brexit, episodes of casual and overt racism, and constant ruminations about race and background fail to obscure the fact that this is, at heart, a light and enjoyable relationship novel that is thin on plot but entertaining in classic Hornby fashion ... The simple fact of their love is convincing; what is less effectively conveyed is just how this relationship works, neither the glue nor the chemistry truly apparent ... As ever, the true delight of a Hornby novel lies in his extraordinarily acute social observation, and in the sheer brilliance of exchanges that sing, zing and capture every nuance of real speech. The book seems almost TV-ready, as page after page of breathtakingly recognisable dialogue is laid out like a screenplay, and even texts seem lifted straight off the phone. The school quiz night with its Mexican buffet and entitled liberals treating Joseph like 'an unexploded bomb' is a masterpiece of farce ... The Brexit vote comes and goes, the arguments from both sides rehashed, but this is territory already so well covered by Jonathan Coe and others, and so well known by the rest of us, that it feels redundant. Just Like You could stand alone as the ladlit-meets-mumlit social satire that it is, its vicious wit paradoxically interwoven with tenderness and empathy. The Observer called Hornby 'the poet of the everyday', and this is exactly what he is. Little escapes his eye. Certain pleased-with-themselves tribes – indeed the metropolitan elite flushed out by Brexit – have rarely been so successfully pinned to a page and left to squirm.
Read Full Review >>
Positive Sarah Ditum,
The Times (UK)
... ﻿especially good at observing the sweet caution and recklessness of early attraction: the almost-empty messages sent with the breath stopped in your throat, half from fear the other won’t understand you and half from fear that they will ... has plenty of witty observation, zeroing in on the cringe of white people fishing for black approval and the adorable embarrassment of the age gap ... One of the problems with the rash of Brexit novels is that novelists as a group tend to be Remain-inclined. Robust and sympathetic pro-Leave characters are consequently in short supply. Joseph is hedging his bets, but so is Hornby: it’s as though he doesn’t trust his readers to stay onside with a full-blown Brexiteer hero. Given his savvy portrayal of Lucy’s self-righteous social circle, perhaps that’s a reasonable judgment for him to make, but it lowers the stakes and makes the relationship between Lucy and Joseph at times feel glib ... In other ways, though, it’s a quietly brave novel ... Hornby is making a modest argument for his art, sliding into the consciousness of two people who are not like him and showing how their mutual affection can cut through the seemingly fixed lines of society. On that point, Just Like You is an endearing success.
Read Full Review >>
See All Reviews >>
SIMILAR BOOKS
Fiction

Silence Is My Mother Tongue
Sulaiman Addonia
Positive
What did you think of Just Like You?
© LitHub | Privacy