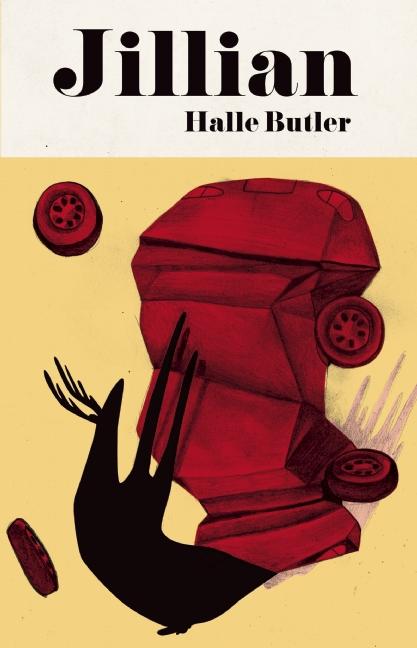 Megan, recently out of college and working a meaningless job as a gastroenterologist's secretary, openly hates all of her friends for being happy and successful. She makes herself feel better by obsessively critiquing the behavior of her coworker, Jillian, a rapid cycling, grotesque optimist, whose downfall is precipitated by the purchase of a dog.

What The Reviewers Say
Rave LELAND CHEUK,
The Rumpus
Droll, scatological, and delightfully subversive in its gender portrayals, Jillian is what the TV show Girls would be if 1) it were a novel and 2) it were at its best every week ... Butler is a ninja at conjuring Jillian’s peculiar mental state in her internal monologues, which are mundane, absurd, and foreboding all at once ... Jillian is a hilarious portrayal of those urban twenty-something years—that age before you’ve made any choices to define yourself, and everything is a placeholder for an uncertain future that scares you ... Jillian is a darkly comic allegory about America, a nation pathologically unwilling to make tough choices for a better tomorrow, but quite willing to trade substantive change for ephemeral satisfaction (i.e. spiritual junk food). Read that way, Butler’s novel is not just the funniest book I’ve read in a long time, but also one of the most important ones.
Read Full Review >>
Positive JOHN THURGOOD,
Electric Literature
The beauty of this novel is that Butler handles their respective misery with deft clarity and dry wit, turning expectation on its head, only to prove its worth in the end ... [Jillian] is a walking contradiction, which at times bottoms-out to create some of the saddest and most endearing moments of the novel, but it’s impossible to ignore the fact that these moments are a direct result of Jillian’s own mistakes. And that is the real challenge in this novel’s narrative; in order to empathize with Jillian and other characters, one is force to reconcile the ugliness within themselves, the part of themselves that is needy and unreliable. Butler takes a real risk here, hinging the success of her novel on her readers’ ability to forgive themselves for being just as selfish and unaware as her characters ... Butler maneuvers the distance within her prose in a different direction, creating a narrative that flitters between consciences, pulling from each a side-long perspective of the human condition and revealing it to be unpredictable and dangerous, and, nevertheless, righteous ... A frank depiction of modern indecency, and a reflection of a generation that lacks any shred of a moral compass.
Read Full Review >>
Rave KATHLEEN ROONEY,
The Chicago Tribune
The old saw about how what we find annoying in others is often what we most despise about ourselves is on rampant, vulgar display in this sublimely awkward and hilarious book about two women who loathe each other only slightly less than they loathe themselves ... The dialogue in this novel is delightfully offbeat ... These two main characters are incredibly unpleasant, but not unsympathetic, and the point of view that Butler chooses is brilliant; she stays mostly with a close third person on Megan and Jillian, but jumps smoothly as needed into other consciousnesses ... This novel isn't big on hope ... This is a grotesque and absurd book about grotesque and absurd people stuck in a system that is itself grotesque and absurd. It may be the feel-bad book of the year.
Read Full Review >>
See All Reviews >>
SIMILAR BOOKS
Fiction

Fake Accounts
Lauren Oyler
Positive
What did you think of Jillian?
© LitHub | Privacy