If We Had Known 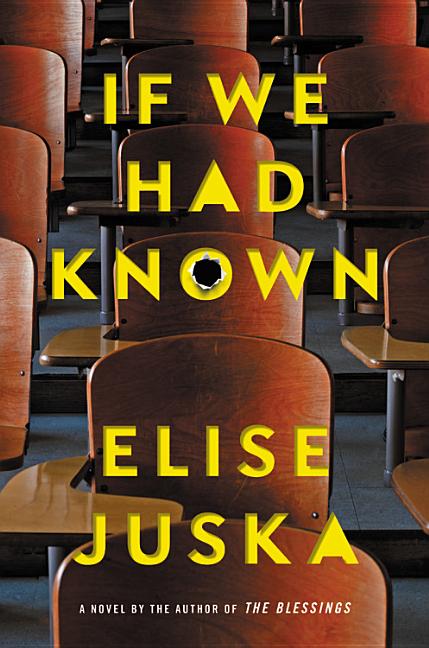 English professor Maggie Daley and her college-student daughter struggle with guilt, fear, and the dangerous bonds of family in the aftermath of a mass shooting in their small New England town when it is revealed that the gunman had been one of Maggie's students.

What The Reviewers Say
Rave Michael Berry,
The Portland Press Herald
Juska constructs If We Had Known with intelligence, sensitivity...digging deep into her characterizations and settings. She depicts an uncomfortable mother/daughter dynamic, two intelligent women coming undone in very particular ways but eventually finding the courage to face their fears together and on their own ... Juska offers few clues about the motivations of [shooter] Nathan Dugan, which is exactly the correct choice given how few real-life incidents like this offer clear-cut answers. Juska also critiques the lure of social media, clearly and smartly depicting its potential for unthinking destructiveness.
Read Full Review >>
Positive Lauren Mechling,
The New York Times Book Review
The shots have already been fired at the outset of Elise Juska’s quietly clever novel ... Juska...neatly lays the groundwork for a character who would be liable to miss flagrant warning signs ... In keeping with a novel about a writing instructor, Juska’s prose is clean and straightforward. She strikes a cozy tone that is the literary opposite of toxic masculinity ... The pace can drag, and no novel needs so many descriptions of the color and cast of the sky. But in our age of political rancor and tweet storms befitting our state of emergency, there is something radical about a take on the gun problem that concerns itself more with raising questions than ire.
Read Full Review >>
Positive Cortney Ophoff,
Booklist
Through the all-too-familiar terrain of this modern-day tragedy, Juska...explores the growing issue of anxiety among today’s youth, asking readers to consider the ways in which our actions have increasingly far-reaching impact. Switching between viewpoints, Juska contrasts the actions of a split second and the slow burn of a lifetime of behavior to show that both can have extensive, damning consequences that are rarely foreseen.
Read Full Review >>
See All Reviews >>
SIMILAR BOOKS
Fiction

A Shock
Keith Ridgway
Rave
What did you think of If We Had Known?
© LitHub | Privacy