Identity, Ignorance, Innovation: Why the Old Politics Is Useless—And What to Do about It 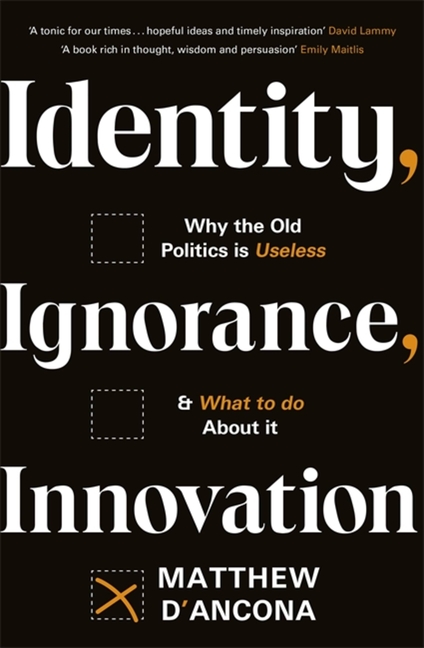 The former editor of the British magazine The Spectator explores the failure of formerly sacrosanct liberal ideas based in class and hails the newly urgent idenitarian politics that have risen in response, offering ways to combat the backlash of bombastic populism and democratic torpor on both Left and Right.

What The Reviewers Say
Positive James Bloodworth,
The Sunday Times (UK)
He is good on the joys of reading for pleasure ... He persuasively argues that this dysfunctional system is churning out young people who are 'over-qualified but afflicted by ignorance' ... D’Ancona makes his case well. He is right to argue that identity-driven movements exist because there are genuine grievances about racism and sexism. The book is well written and thoughtful and he avoids the self-flagellation fashionable among liberals ... However, I am less optimistic that this new form of digitally amplified tribalism will improve public life.
Read Full Review >>
Positive Charlotte Henry,
The Times Literary Supplement (UK)
... the very obviousness of its focus emerges as one of the key strengths of Identity, Ignorance, Innovation. This is because of d’Ancona’s range. The author neatly synthesizes material from across the political spectrum, drawing on a range of references, and powerfully backs up his arguments with evidence ... D’Ancona is particularly clear-eyed about identity politics ... Identity, Ignorance, Innovation convincingly argues that we can aim higher, and that collaboration, tolerance and education are the keys to navigating the array of challenges and changes we currently face. However, there is a key part of the story that is touched on all too sporadically, if at all. This is the position of older millennials (such as the author of this review) ... he offers too little on how a small but significant cohort that has already been directly affected by not one but two 'once in a generation' shocks could or should respond. This book is no complete policy guide, then, and it does not claim to be. However, d’Ancona’s regular practical suggestions help to take it beyond mere theory and into the real world—which is more than can be said for many of today’s political commentators. Decision-makers would do well to read it.
Read Full Review >>
Mixed Henry Mance,
Financial Times (UK)
This is an old debate [about strengthening education], and, although d’Ancona’s contribution is passionate (one senses the frustrated parent), it lacks the detailed evidence to offer a truly persuasive alternative ... D’Ancona is generous with his excerpts of other writers...Perhaps as a result, Identity, Ignorance, Innovation does not add up to a political agenda (it also sidesteps questions from the constitution to climate change). What I most took from d’Ancona’s book was his lack of complacency: his is a heartfelt attempt to renew liberal ideals for the coming decades. He cites and employs the principle of charity—interpreting someone’s arguments in the most reasonable way possible. How sorely our public debate needs others to express themselves similarly.
Read Full Review >>
See All Reviews >>
What did you think of Identity, Ignorance, Innovation: Why the Old Politics Is Useless—And What to Do about It?
© LitHub | Privacy