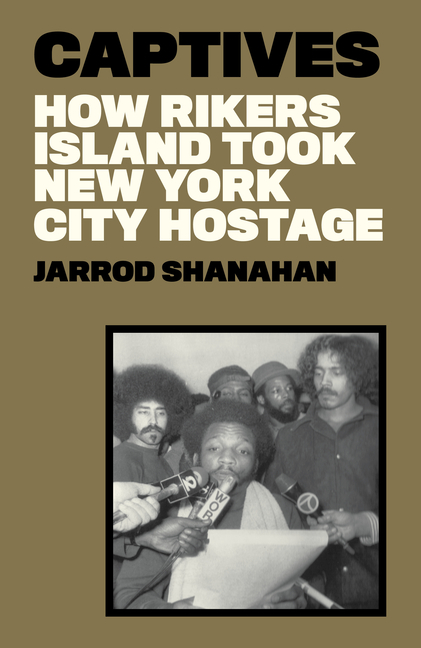 The definitive history of America’s most notorious jail and the violent rise of New York City’s law-and-order movement.

What The Reviewers Say
Rave Abby Cunniff,
Los Angeles Review of Books
Beyond elucidating how Rikers has influenced municipal politics, Captives asks how jailing contributed to the newest iteration of a racialized social order in New York, which then spread to the rest of the country...From his perspective on Rikers looking back at the Manhattan skyline, Shanahan realized that jails are not only a critical component of the city's social order, but that they are the necessary opposite of New York's famous destinations...To incorporate this source material effectively, Shanahan engages with incarcerated people on a number of levels, including the conditions of their arrest, their political networks, and their personal lives..Shanahan shows how the violence that holds New York City jails together was built up through guards’ enforcement and administrative reforms over the preceding decades...Captives shows that the DOC will never solve the problems on Rikers...Their outsize role in the public budget only exacerbates the city’s racist and exploitative economic system...To fix Rikers, you have to fix New York.
Read Full Review >>
Rave Brendan O'Connor,
The Baffler
Shanahan’s Captives identifies Rikers Island as the black hole at the heart of the city, something like Times Square’s 'necessary opposite,' summoned up out of the muck and mire of the East River: 'at the same time that Rikers is removed from the city, a space of enforced isolation surrounded by the East River, it is also thoroughly constituted by New York City, and, in turn, constitutes it'...Shanahan, who was arrested and held on Rikers during the anti-police rebellion that followed Michael Brown’s killing in 2014, tells the story of how the island, once imagined as a space of reform and rehabilitation, came instead to be 'the domain of a violent custodial force that demanded—and won—almost-untrammeled recognition of their freedom to dispose of the city’s prisoners however they saw fit'...Abolitionists and other radicals opening this book might expect a history of prisoner rebellions and revolts, and these stories are present...But for Shanahan, the key antagonism in the city’s jails has in fact been that between guards and management...Captives is, in effect, a labor history: a history of guards in New York City’s jails generally, and on Rikers specifically, struggling for autonomy over their workplace—which is to say, for the right to deal out violence with impunity—against the managers, politicians, and judges seeking to impose their own ideas about how the city’s carceral institutions ought to be run.
Read Full Review >>
Rave Kay Gabriel,
The Nation
Shanahan’s new book, Captives: How Rikers Island Took New York City Hostage, traces in detail the competing political agendas that produced Rikers, following the history of the city’s jails from the 1950s up through the end of Ed Koch’s mayoral administration...Shanahan makes it possible to answer the immediate and pressing question—why did an agenda of jail reform fail so drastically, producing in the process one of the most notorious penal colonies in the United States?—by asking, and answering, several others...Captives in that sense is more than a history of Rikers: It chronicles the transformations of finance, industry, race relations, and political consciousness that made the jail complex possible in the first place...Shanahan documents the tumultuous second half of the 20th century in New York City—the fading glow of the New Deal; the rise of Black Power and the New Left; the near-total exit of the city’s manufacturing capital, and the subsequent capture of the political apparatus by the banking and real estate sector; the imposition of austerity policies following the fiscal crisis of the 1970s—from the standpoint of the city’s jails, as well as the people warehoused within and fighting to get out of them.
Read Full Review >>
See All Reviews >>
What did you think of Captives: How Rikers Island Took New York City Hostage?
© LitHub | Privacy