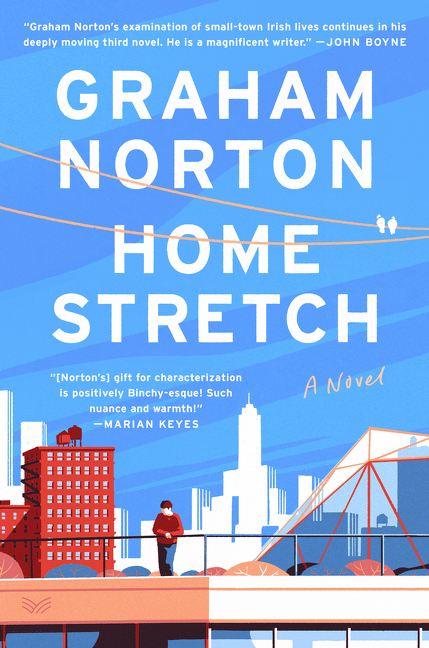 It is 1987 and a small Irish community is preparing for a wedding. The day before the ceremony, a group of young friends, including the bride and groom, are involved in an accident. Three survive. Three are killed. The lives of the families are shattered and the rifts between them ripple throughout the small town. Connor survived, but living among the angry and the mourning is almost as hard as carrying the shame of having been the driver. He leaves the only place he knows for another life, taking his secrets with him. Travelling first to Liverpool, then London, he eventually makes a home--of sorts--for himself in New York, where he finds shelter and the possibility of forging a new life. But the secrets--the unspoken longings and regrets that have come to haunt those left behind--will not be silenced. Before long, Connor will have to confront his past.

What The Reviewers Say
Rave Darragh McManus,
The Independent (IRE)
... Home Stretch is a very fine novel ... Home Stretch seems to me a love-letter from Norton to his homeland - the people and place that made him, for good or ill. He doesn't gloss over the bad things that were done, societally and individually: those gratuitous acts of spite or pride which made others' lives much harder than they needed to be. At the same time, though, he sees the complexity in people, the shades of grey - the way we all constantly balance those competing, compelling actors on our shoulders, the angel and the devil. And he appreciates and applauds the better aspects of Irish society, then and now: friendliness, warmth, forgiveness, humour, stoicism, community.
Read Full Review >>
Rave Claire Fullerton,
New York Journal of Books
Home Stretch by Graham Norton is a vibrantly written, delightful story ... Author Graham Norton is a masterful storyteller. The layered crafting of Home Stretch is rife with pithy innuendo and story-driving personality. His sharp eye captures the nuance of small-town Ireland in the process of evolution as he unfurls this interconnected story with spellbinding verve and finesse.
Read Full Review >>
Rave Ray Palen,
Bookreporter
... Norton has created a work that is completely different from his previous literary efforts and may find him placed side-by-side on those very same bookshelves with authors of 'serious' fiction. That is how impressed I am with his latest novel ... Home Stretch demands to be read quickly and savored. It is a heartfelt tale of love, loss, secrets and the strength that is necessary to live your best life. As I finished the book, I kept wondering if any part of it was autobiographical. Norton does thank all the people who stayed in Ireland to fight for the modern, tolerant country it has become while he chose to take the easy way out by leaving to find places where he could be himself. He may need to dust off space on the awards shelf next to his eight BAFTAs to make room for the well-deserved accolades he should receive for this wonderful novel.
Read Full Review >>
See All Reviews >>
SIMILAR BOOKS
Fiction

Metropolis
B. A. Shapiro
Mixed
What did you think of Home Stretch?
© LitHub | Privacy