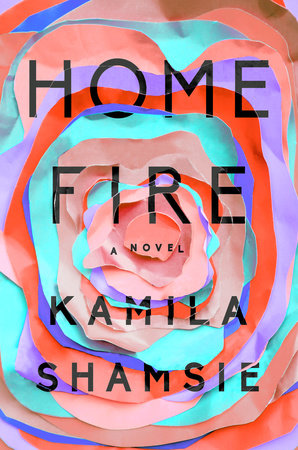 A reimagining of Antigone set in contemporary London, focusing on two Muslim families whose lives are entangled by politics and conflict.

What The Reviewers Say
Rave Katharine Weber,
The Washington Post
Shamsie excels at lovely descriptive writing of small moments ... there is no doubting that Antigone inspired her, but Home Fire succeeds without forcing this context. While Colm Tóibín’s recent (and extraordinary) novel House of Names is a retelling of Clytemnestra’s story of murder and revenge, Home Fire treats its source much more distantly. This is a haunting novel, full of dazzling moments and not a few surprising turns, that manages to be suspenseful despite its uneven momentum. When deep religious and political conflicts get personal in this story, beliefs and choices and agendas are inevitably on a fatal collision course. Home Fire blazes with the kind of annihilating devastation that transcends grief.
Read Full Review >>
Positive Natalie Haynes,
The Guardian
It is in this move away from the earliest incarnations of the myth that Shamsie’s novel is most successful: she drops the incestuous nature of the children’s parentage, and ditches the second brother, so that Parvaiz is guilty of all kinds of things, but not fratricide. This costs her something in the ambivalence the reader must feel about Parvaiz and correspondingly reduces some of the potency of Aneeka’s sacrifice. But it grounds the novel in the here and now, rather than allowing it to slide into melodrama, an undeniable risk with tragedy-turned-fiction – although it perhaps contributes to the novel’s slightly frustrating conclusion. Shamsie’s prose is, as always, elegant and evocative. Home Fire pulls off a fine balancing act: it is a powerful exploration of the clash between society, family and faith in the modern world, while tipping its hat to the same dilemma in the ancient one.
Read Full Review >>
Rave Dwight Garner,
The New York Times
...[an] ingenious and love-struck novel ... This novel may seem to wobble in the minutes after its landing gear retracts. There are lurching shifts of tone as it moves between matters of the heart and of state. Do not panic. Order something from the drinks cart. Shamsie drives this gleaming machine home in a manner that, if I weren’t handling airplane metaphors, I would call smashing ... Home Fire builds to one of the most memorable final scenes I’ve read in a novel this century.
Read Full Review >>
See All Reviews >>
SIMILAR BOOKS
Fantasy

When We Were Young
Richard Roper
Positive
What did you think of Home Fire?
© LitHub | Privacy