Here and Now and Then (Original) 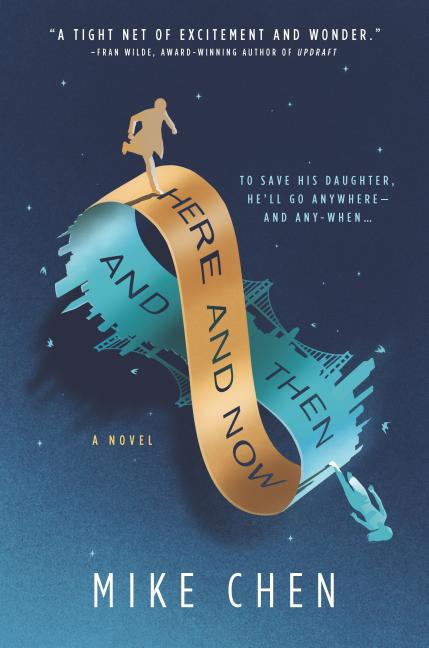 Stranded for eighteen years since the 1990s, time-traveling agent Kin Stewart, suffering from memory loss, has started a new life, but when rescuers from the year 2142 finally arrive, he must choose between his current family and the one he left behind in the future.

What The Reviewers Say
Rave Ilana Masad,
NPR
Even more than these delightfully surprising turns, the novel's strength lies in Kin's actions as he tries to save Miranda, both from a miserable life in which she believes her father abandoned her entirely — and from his own bosses ... Ultimately, Mike Chen's time travel narrative feels like an extended metaphor, and it's no surprise to see that Here and Now and Then is dedicated to his own daughter, Amelia.
Read Full Review >>
Positive David Walton,
New York Journal of Books
Charming and satisfying ... As science fiction, this book brings little that’s new to the time travel genre...What makes this novel a delight is the very relatable tale of a father struggling to know and love his daughter, to protect her from harm while allowing her to make her own choices and fulfill her potential ... The people in the story are all well-drawn and believable, with no real villains. Even when the Temporal Corruption Bureau determines that Kin’s daughter must be killed to protect the future, the decision is represented by his fiancée’s brother, a likable friend compelled to do something horrible because it must be done. The ending is clever and surprising, a twist that neatly ties up all loose ends and provides a happy ending for all involved.
Read Full Review >>
Positive Leah von Essen,
Booklist
Stirring ... dedicates detail and precision to the vagaries and paradoxes of time travel, without sacrificing its vital emotional core ... Chen carefully balances heart, humor, and precise world building to bring alive an emotional and genre-bending story that will please fans of Doctor Who.
Read Full Review >>
See All Reviews >>
SIMILAR BOOKS
Fantasy

40
Alan Heathcock
Positive
What did you think of Here and Now and Then (Original)?
© LitHub | Privacy