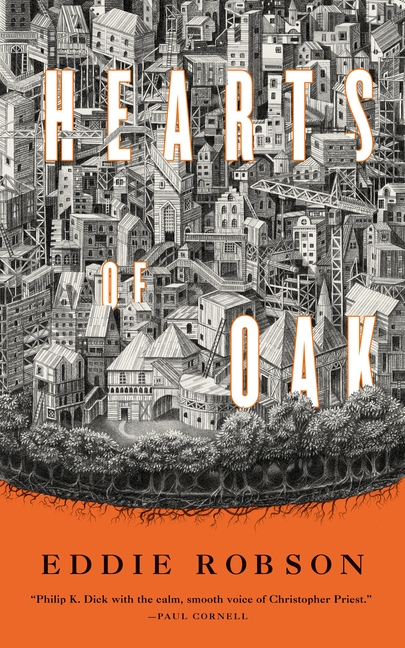 Iona, Steve, Saori, and Victor can’t remember a time when they didn’t live in the unnamed city or follow their daily routines. They go to work, go home, and repeat this cycle again the next day alongside their obedient, homogeneous fellow citizens. But the arrival of a stranger triggers repressed memories, sending all four hurtling into danger.

What The Reviewers Say
Rave Jason Heller,
NPR
Brief in page-count and quiet in voice, the book is a gleaming gem of offbeat weirdness and oddball humor, a work that blends fantasy and science fiction more cleverly than almost anything in recent memory. But underneath that quirky whimsicality beats a deeply thoughtful, even melancholy pulse ... Robson is a previously published novelist, but his primary background is in other media: television, podcasts, comics, and radio ... He's used to writing concisely and efficiently, with a strong emphasis on dialogue. Those skills shine in Hearts of Oak. The book packs in oodles of dry wit and droll self-mockery, the sort of profound and lacerating laughter that Robson's countrymen Douglas Adams and Terry Pratchett perfected. At the same time, there's a poignant sincerity to Iona's struggle to understand herself and her world — and even to the King's inept, quixotic quest to build the largest city in a world where, apparently, there aren't even any other cities ... It's a testament to Robson's swift storytelling, endearing characters, and deftly controlled world-building that the book not only works on both ends but succeeds wildly ... Robson satisfyingly stirs up an entire trilogy's worth of wacky and wise philosophy in the span of a couple hundred pages. Hearts of Oak may be small in stature, but it packs a fat, speculative wallop.
Read Full Review >>
Positive Regina Schroeder,
Booklist
Nothing is as it seems, even where it seems quite unusual, like the figures at a foggy window on the outskirts of the city ... Reality is shaped by expectations and force of habit, and a sudden change in either leads to revelations. It is a clever story, reliant more on its central thematic conceit than character, but certainly entertaining and quite satisfying.
Read Full Review >>
Positive Kirkus
The deep sense of puzzling oddness in the beginning of this book is totally captivating. The surface-level mildness and niceness of this world underscore the sense of mystery and offer plenty of opportunities for comedy. Once the reason for all the oddness is revealed, the story does lose some of its drive. But Robson...manages to rekindle the suspense for its final push.
Read Full Review >>
See All Reviews >>
SIMILAR BOOKS
Literary

Unconquerable Sun
Kate Elliott
Rave
What did you think of Hearts of Oak?
© LitHub | Privacy