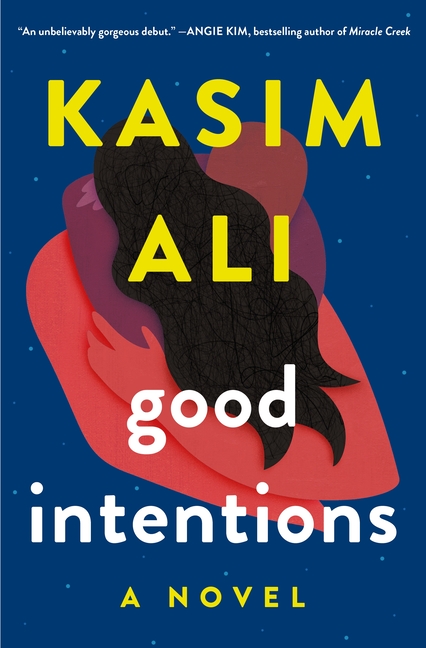 A young British Pakistani Muslim man, Nur has been hiding his girlfriend from his family. Although Yasmina is successful and a practicing Muslim, her identity as a Black woman has convinced Nur that his racist parents will never accept her. Nur's reticence causes tension with Yasmina, and Nur must confront his own internalized racism.

What The Reviewers Say
Rave Sim Bajwa,
The Skinny (UK)
In Good Intentions, Kasim Ali not only lays bare the sweetness and nerves of first love, but also levels an unflinching gaze on the prejudices and racism within minority communities ... This is a complex, tender and bittersweet love story that interrogates familial obligation, religion, race, what it means to be 'good' ... Despite Nur’s belief that he’s in an impossible position, the novel is also incredibly hopeful—maybe our immigrant parents aren’t as immovable as they seem, and perhaps the future holds more choices than we believe. Beautifully written, this will appeal to fans of Caleb Azumah Nelson, Candice Carty-Williams, and Sally Rooney.
Read Full Review >>
Positive Johanna Thomas-Corr,
The Sunday Times (UK)
Is it worth the fuss? Yes—but with some reservations. Beneath Ali’s overearnest prose is a rather clever novel about vulnerability and victimhood that subtly subverts the reader’s expectations ... This melancholy story shuttles between two timelines five years apart, which eventually converge. Given all the action takes place between 2014 and 2019, it’s interesting Ali chooses not to bring Brexit and the rise of the far right into his narrative. Instead it’s a determinedly intimate story composed of seemingly humdrum conversations that gradually complicate our ideas about Nur ... Initially I was frustrated by Ali’s prose—which can feel sentimental in its descriptions of Nur’s angst. But it skilfully lulls us into thinking of him as helpless before showing the dangers of an overdeveloped persecution complex. On the surface Good Intentions is a poignant romance about the cultural barriers that stand in the way of two young people pursuing an honest relationship. Yet beneath there is a cautionary tale about what happens when you get so caught up in your own vulnerability that you forget your responsibility to others.
Read Full Review >>
Positive Barbara Love,
Library Journal
There is something of a Sally Rooney vibe to this story about twentysomethings navigating adult waters (the snappy dialogue, the conflicted emotions, the relationship dramas), but Ali’s novel veers off on a darker course as questions of race and culture threaten to undermine a once solid love. This timely, savvy novel is recommended.
Read Full Review >>
See All Reviews >>
SIMILAR BOOKS
Coming Soon