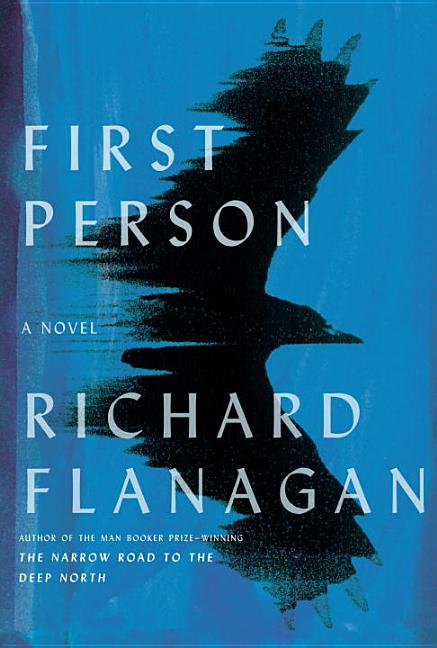 From the Man Booker Prize-winning author of The Narrow Road to the Deep North, a semi-autobiographical novel of a ghost writer writing the memoir of a notorious con man, and the chilling events that unfold as their lives become increasingly intertwined.

What The Reviewers Say
Rave Alexander Moran,
Booklist
In a brilliant third act, Flanagan turns his savage mockery to the recent trend of autobiographical fiction, including the celebrated, multivolume My Struggle by Norwegian writer Karl Ove Knausgaard. Full of hilarious asides, this sonorous, blackly comic novel offers searing insight into our times.
Read Full Review >>
Mixed William Giraldi,
The Washington Post
If ever you’ve wanted to read a book about the impossibility of writing a book, First Person is the book for you, a story about a storyteller trying to decode another storyteller ... If the first half boasts a shimmering ingenuity and ominousness, the second half goes down in a Hindenburg of repetition and falsity and tedium ... But at its most persuasive, First Person is an aria on the necessity of self-invention, on the loops and lacunas of memory and the bullish inadequacy of all language ... At a time when truth is daily contorted, debauched or ignored, we require Flanagan’s artful reminder of the wreckage caused by our unwillingness to say what happened.
Read Full Review >>
Positive Carl Wilkinson,
The Financial Times
First Person is both comic and frightening. At times I caught a glimpse of Money-era Martin Amis in Flanagan’s satirical asides on the Australian publishing industry ... Yet there are also passages touched with the virtuosity that shone so brightly in The Narrow Road that are pure Flanagan ... Although structurally Flanagan struggles to reconcile the comedy and tragedy, and his musings on fact versus fiction, the self versus the collective, into a distinct whole, First Person, too, is studded with sharp, breath-catching observations about the finite nature of life.
Read Full Review >>
See All Reviews >>
SIMILAR BOOKS
Fiction