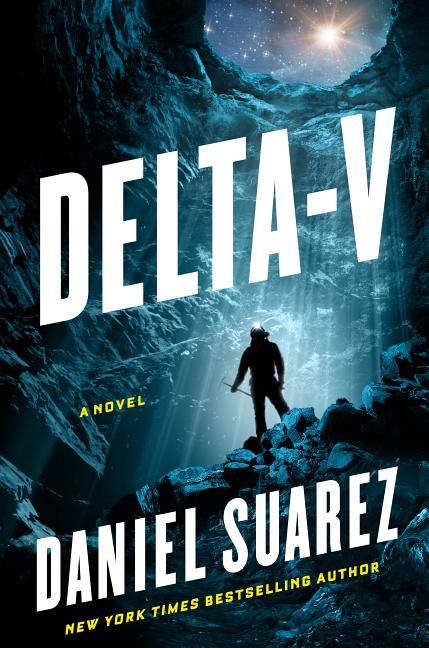 In the latest from the bestselling author of Change Agent, itinerant cave diver James Tighe is shocked to receive an invitation to billionaire Nathan Joyce's private island. But Tighe's unique skill set makes him a prime candidate for Joyce's high-risk venture to mine a near-earth asteroid—with the goal of kick-starting an entire off-world economy—with a team of ex-soldiers, former astronauts, BASE jumpers, and mountain climbers who face not only the dangers of a multi-year expedition but the harsh realities of business in space.

What The Reviewers Say
Rave Tom Shippey,
The Wall Street Journal
Daniel Suarez’s hugely impressive Delta-v...fuses the real world with sci-fi, giving the space genre a new boost and new hope ... The philosophy of Nathan Joyce, Mr. Suarez’s financier-hero, is to send humans up to solve problems on the spot that pre-programmed AIs couldn’t. The risks they run provide the narrative excitement: technical failures and rival billionaire-projects in space, creditor takeovers and angry governments back on earth. Even more exciting, though, is the sense of what could and can be done ... This is the High Frontier for financiers and politicians as well as for fans.
Read Full Review >>
Rave Ray Palen,
Bookreporter
Author Daniel Suarez has slowly gotten quite a reputation as a master of high-tech, sci-fi thrillers. Not only is Delta-v no exception, it very well may be his finest work to date ... Daniel Suarez has combined cutting-edge sci-fi with all the components of a great thriller, leading to spectacular results. He utilizes both aerospace and political themes, each rife with all the pitfalls and surprises that come with them. Throughout his career, Suarez has found consistent comparison to the late, great Michael Crichton. I can assuredly support that he is in a very small group of current writers who can carry that weighty mantle forward.
Read Full Review >>
Mixed Steve Donoghue,
Open Letters Review
Readers are taunted a couple of times with the vision of a novel about colonizing Mars, but what they get instead is a big, boisterous book about mining an asteroid in order to shore up banking collateral. The mission is intensely predictable; Tighe himself an action-hero mannikin; the Act Three surprise isn’t actually surprising; and there are stretches of operational chatter ... very little in Delta-v should work. But Suarez is an old and practiced hand at creating silk purses out of sow cave divers. Delta-v never falters because it never doubts its own storytelling virtue; it’s a purely silly and purely effective thriller, exactly the kind of plot-driven potboiler that would once have been put before the reading public in a $3 paperback with an eye-catching cover.
Read Full Review >>
See All Reviews >>
SIMILAR BOOKS
Fiction

The Deceptions
Jill Bialosky
Positive
What did you think of Delta-V?
© LitHub | Privacy