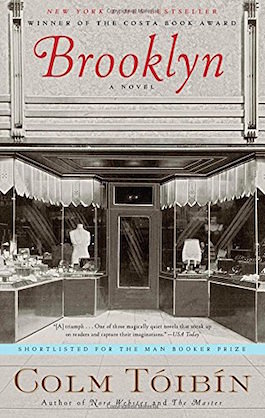 Eilis Lacey grapples with living a life between two worlds – small-town Ireland and Brooklyn, New York – in a portrait of time, place, and new love.

What The Reviewers Say
Rave Liesl Schillinger,
The New York Times Sunday Book Review
America is peopled, for the most part, by the descendants of immigrants who had the resolve, the daring and the detachment to leave behind the places and people they had formerly known. But Eilis isn’t such a person; detachment isn’t part of her makeup. It has been thrust on her by women who are as attached to home and family as she is … In tracking the experience, at the remove of half a century, of a girl as unsophisticated and simple as Eilis — a girl who permits herself no extremes of temperament, who accords herself no right to self-assertion — Tóibín exercises sustained subtlety and touching respect. He shows no condescension for Eilis’s passivity but records her cautious adventures matter-of-factly, as if she were writing them herself in her journal.
Read Full Review >>
Rave Jonathan Yardley,
The Washington Post
The period feeling of Brooklyn is genuine and impressive … Eilis gets off to a good start at the store – she may be unassuming, but she's also competent and resourceful – but then she receives a batch of letters from home, and suddenly her head is filled with images of what she has left behind … The portrait Tóibín paints of Brooklyn in the early '50s is affectionate but scarcely dewy-eyed; Eilis encounters discrimination in various forms – against Italians, against blacks, against Jews, against lower-class Irish – and finds Manhattan more intimidating than alluring. Tóibín's prose is graceful but never showy, and his characters are uniformly interesting and believable.
Read Full Review >>
Positive Liam McIlvanney,
The London Review of Books
In his portrayal of an ethnic enclave, a hyphenated America, Tóibín is broaching one of the big perennial subjects of American fiction…Brooklyn is unusual in telling the story from the immigrant’s perspective, the more so since Tóibín’s protagonist is female, young, unattached and Irish … It is what Eilis cannot put in a letter that gives Brooklyn its narrative bite...But Tóibín can tell us, and he does so at often hilarious length … It may be that Tóibín’s most significant gift is a very basic and mysterious one: he creates fictional worlds in which readers find it easy to believe … This ability to vivify imagined worlds is central to Brooklyn’s success. So long as we remain with Eilis Lacey in New York, her new world engrosses and enthrals us.
Read Full Review >>
See All Reviews >>
SIMILAR BOOKS
Fiction

Each of Us Killers
Jenny Bhatt
Rave
What did you think of Brooklyn?
© LitHub | Privacy