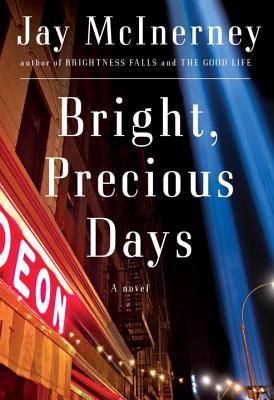 The third installment of McInerney's examination of the lives of fashionable, and now middle-aged, New York couple Corinne and Russell Calloway.

What is this?
Mixed
Based on 16 reviews

What The Reviewers Say
Positive Adelle Waldman,
The New Yorker
Nobody has a more exquisite appreciation than McInerney of the morbid, hypervigilant sensitivity we tend to harbor about our place in the world, especially when we’re feeling down ... the picture that emerges of a marriage that seems both more stable and lonelier than it has ever been, is quietly affecting ... Bright, Precious Days is mellow, earnest, almost elegiac. It is intelligent, and knowing in its depiction of certain segments of New York (especially the world of publishing), but, unlike his best-known novels, it’s rarely dazzling.
Read Full Review >>
Positive Bruce Handy,
The New York Times Book Review
Bright, Precious Days can’t really be read or discussed apart from its predecessors; it doesn’t hold its own water. I came to think of it less as a sequel than as the latest season of one of the great TV dramas, like The Sopranos or Mad Men — slow to reveal its cards, inherently uneven, but confident that its audience has already invested enough time to take pleasure in the slow accretion of detail and the occasional narrative cul-de-sac that might irritate in less steady hands. If a TV series can now be called novelistic, it seems fair to call a novel TV-istic. I mean it as a high compliment: an art form of sustained intimacy.
Read Full Review >>
Mixed James Endrst,
USA Today
And McInerney certainly hasn’t lost his impressive ability to tell a story, though the novel does get a little doughy around the middle. But despite his talent, the nagging feeling persists throughout that, save Russell, deep down most of these characters are narcissistic, empty vessels. And, cultural sightseeing aside, that means we have no real reason to care.
Read Full Review >>
See All Reviews >>
SIMILAR BOOKS
Fiction