Blood and Treasure: Daniel Boone and the Fight for America's First Frontier 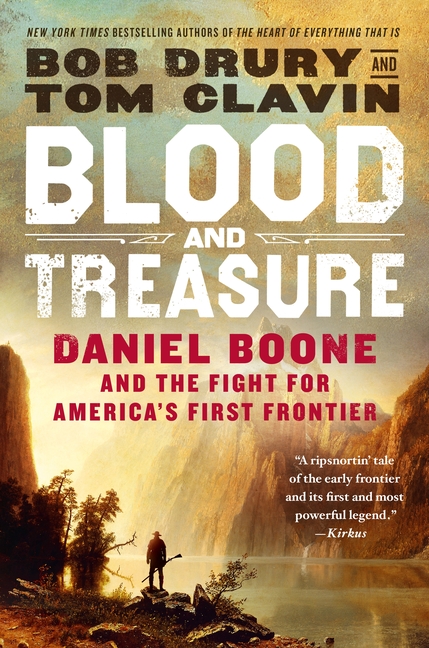 Popular historians Drury and Clavin return with a look at the legend of the Revolutionary War hero Boone and his role in America's bloody war with Native Americans to dominate territory beyond the Appalachian Mountains.

What The Reviewers Say
Rave Peter Cozzens,
The Wall Street Journal
This may be the authors’ finest work to date. Unquestionably, Blood and Treasure is among the most redolent of time and place. I felt myself immersed in the sights, sounds and smells of frontier life, as well as the lurking dangers and gruesome deep-forest clashes between grasping frontiersmen and Native Americans defending their country—such are the authors’ keen descriptive powers. Numerous excellent maps enhance the text ... a raw and rugged tale with no shortage of horror and gore. The work is not hagiographic in its appraisal of Boone, whose shortcomings—his business naivete, for instance—the authors readily acknowledge. And there can be no escaping the painful truth that Boone’s frontier aspirations were antithetical to Native American survival. Nonetheless, he emerges as a fundamentally decent man, particularly in his devotion to family.
Read Full Review >>
Rave Dave Tabler,
Appalachianhistory.net
They convey in wonderful detail Boone’s early hunting expeditions and explorations of what is now Kentucky, particularly the remarkable expedition into the level plain of Kentucky along with Findlay. But then, in what at first appears as an unrelated thread, the authors provide chapters about the Native American tribes in the territory of what is now Ohio ... I thought while reading those chapters that, perhaps, the authors may have been too ambitious, because I lost Daniel Boone in the extensive narratives. They soon proved me wrong, however, as those chapters provide a key to understanding the 'Fight for America’s First Frontier' ... I felt that I had been given by the authors the key to understanding the context in which such events took place. The earlier chapters provided a much needed tutorial on the complexity of the Native Americans’ experience in the years leading up to King George III’s Proclamation of 1763 and the eventual American Revolution ... a splendid book, well-researched and beautifully written, by two very fine authors. I heartily recommend it.
Read Full Review >>
Positive Curtis Edmonds,
Bookreporter
Because this area of history is so often neglected, it’s extremely helpful that the authors pause in telling Boone’s story to provide the missing perspective ... This is especially helpful in terms of the focus placed on the tribes that were ultimately displaced and dispossessed by Boone and the settlers who came after him. Blood and Treasure is clear about the human cost of American expansion beyond the Appalachians, portraying Boone not so much as a heroic pioneer but as one of many participants in what turned out to be an unequal struggle ... Drury and Clavin, to their credit, aren’t in the mythmaking business and present Daniel Boone as a player in a larger theater rather than a protean force of nature. Blood and Treasure highlights an oft-forgotten stage of American history and does it—and its subject—justice.
Read Full Review >>
See All Reviews >>
What did you think of Blood and Treasure: Daniel Boone and the Fight for America's First Frontier?
© LitHub | Privacy