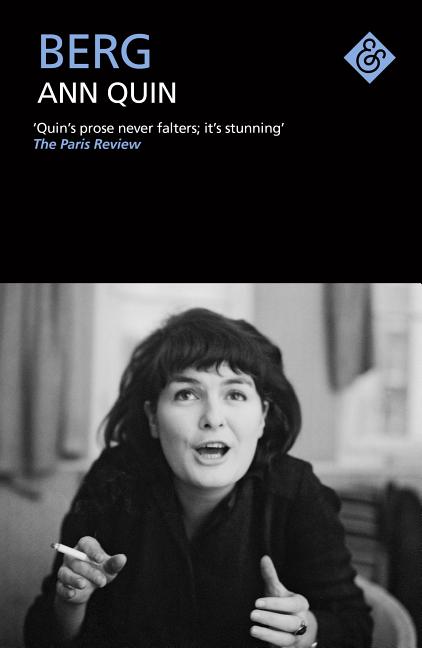 Publisher
And Other Stories
Date
May 14, 2019
Fiction
Literary

Alistair Berg discovers where his father, who has been absent from his life since his infancy, is living. Without revealing his identity, he takes a room next to the one where his father and father’s mistress are lodging and he starts to plot his father’s elimination. Seduction and violence follow, though not quite as Berg intends. Quin's darkly humorous debut novel is now back in print, after much demand.

What The Reviewers Say
Rave Andrew Gallix,
The Irish Times
Berg Ann Quin’s gloriously twisted debut, is the kind of novel Patrick Hamilton or Graham Greene might have composed had they been French existentialists – on acid ... At times ...her prose enters a fugue state that simply takes your breath away. The evocation of what appears to be a near-drowning episode, in the antepenultimate chapter, has at once the hyperreal clarity and baffling opacity of a dream ... For Berg, pain 'overrules everything' until it becomes an 'inanimate object' to be contemplated. I wonder if that object, for Quin, was this book – a triumph of post-war literature. A classic of social surrealism.
Read Full Review >>
Positive Dan Shurley,
BOMB Magazine
...[Quin's] most plot-driven and indebted to first influences: Dostoyevsky, Woolf, Beckett, Greek theater. An Oedipal farce set in a seedy British seaside resort ... The writing is most vigorous when Berg’s out roaming the waterfront, projecting his mental disquiet onto the landscape ... Quin eschews redemption or resolution, suggesting that the Oedipal drama will go on endlessly in new configurations, an unmistakably Freudian conclusion. Berg is a timely case study of a novel precisely because of the connections it draws out between male entitlement, misogyny, and fantasies of violent revenge ... For a book mostly mired in bathos, Berg is never dull. Classical reversals keep things interesting, as when Berg disguises himself as a woman to escape his pursuers ... [Quin's] portrait of Berg is by turns appalling, compassionate, and cynically aware of the limitations of prescribed (read: Freudian) self-knowledge. It’s as good an introduction to her perverse, insurgent vision as any of her books.
Read Full Review >>
Rave Shane Anderson,
The Nation
Quin’s first novel, Berg blends tropes and techniques of crime fiction, vaudeville, and modernist literature ... Alistair believes...the world as he knows it must be destroyed for some undefined new one to come. But what happens when, for whatever reason, annihilation cannot be achieved? What happens when you cannot escape respectable society, the social structures of patriarchy that you were born into? The remainder of Berg dramatizes this problem in dense, lyrical prose ... and it is this prose that makes Quin’s novel so dazzling 55 years later. The language of her book lurches in unexpected directions, fishtailing wildly from the dark to the erotic to the violent to the insanely funny. It feels barely in control, but willfully so. In insisting on this dicey means of narrative movement for the majority of the novel, [Quin] can make even simple actions feel berserk ... Reading Quin is a marvelously frustrating experience that works according to diffraction ... Everything feels frayed, dangerous—but also exciting. More than anything, her prose feels like an exploration of Virginia Woolf’s assessment in the essay Craftsmanship that the task of the writer is 'to see what we can do with the English language as it is.'
Read Full Review >>
See All Reviews >>
SIMILAR BOOKS
Fiction

Mother for Dinner
Shalom Auslander
Mixed
What did you think of Berg?
© LitHub | Privacy