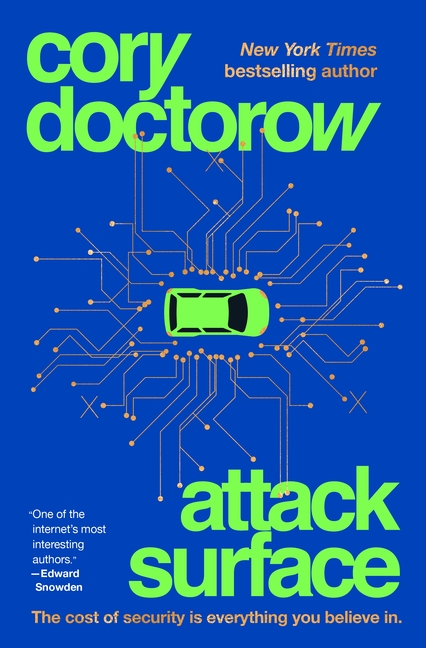 In her day job as a counterterrorism wizard for an transnational cybersecurity firm, Masha made the hacks that allowed repressive regimes to spy on dissidents, and manipulate their every move. Just for fun, and to piss off her masters, Masha sometimes used her mad skills to help those same troublemakers evade detection, if their cause was just. But when it hits close to home, and the hacks and exploits she's devised are directed at her friends and family, Masha realizes she has to choose.

What The Reviewers Say
Rave Paul Di Filippo,
The Washington Post
Cory Doctorow is among the best of the current practitioners of near-future speculative fiction, standing shoulder-to-shoulder with such superlative peers as Bruce Sterling, Kim Stanley Robinson, Charles Stross and Justina Robson ... it’s plain that Doctorow’s 'future history,' however many clever and insightful resonances it still maintains with current headlines, is no longer a plausible near-term guide for the world, but rather the events of a counterfactual 'stub' ... What we enjoy instead is political cyberthriller, vigorous, bold and savvy about the limits of revolution and resistance, even if it’s no longer precisely contoured to our actual dilemmas ... Doctorow relentlessly builds Masha’s character into a deep portrait of a damaged personality ... Doctorow’s world might no longer map our current events, but it still charts the universal currents of the human heart and soul with precision.
Read Full Review >>
Rave Christine M. Irvin,
Bookreporter
... a fascinating technothriller. I thought I knew a fair amount about technology and how it can be used (and is being used) in our everyday lives, but author Cory Doctorow opened my eyes to its endless possibilities. Although I did not grasp all of the technical terms and lingo that he uses throughout the text, I understood enough to follow along with the storyline. The subject matter is certainly a timely one as part of the story deals with the protests in Portland, although naturally they are somewhat fictionalized here.
Read Full Review >>
Rave Nell Keep,
Booklist
Doctorow explores his earlier novels’ idealism and anti-authoritarian politics from the deeply conflicted point of view of someone on the inside. He remains a strong and passionate storyteller, capturing all of Masha’s internal and external conflicts ... Highly recommended for those interested in near-future sf with a politically aware bent.
Read Full Review >>
See All Reviews >>
SIMILAR BOOKS
Coming Soon

The World We Make
N. K. Jemisin
Positive
What did you think of Attack Surface?
© LitHub | Privacy