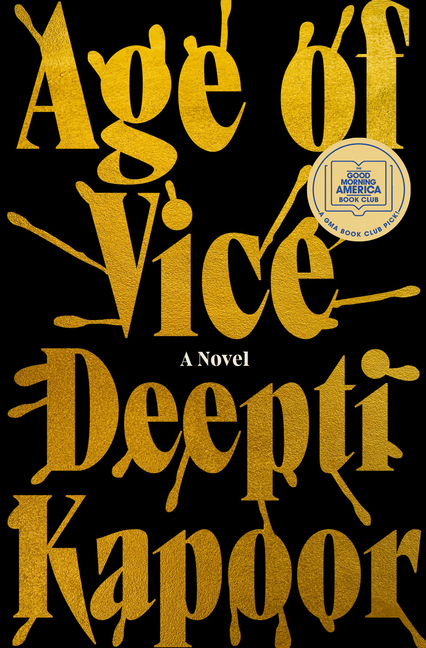 New Delhi, 3 a.m. A speeding Mercedes jumps the curb and in the blink of an eye, five people are dead. It's a rich man's car, but when the dust settles there is no rich man at all, just a shell-shocked servant who cannot explain the strange series of events that led to this crime. Nor can he foresee the dark drama that is about to unfold. Age of Vice is a story propelled by the seductive wealth, startling corruption, and bloodthirsty violence of the Wadia family—loved by some, loathed by others, feared by all.

What The Reviewers Say
Rave Ron Charles,
The Washington Post
Forget the fireworks in New York, London and Dubai. The most dazzling explosions to herald 2023 come from Deepti Kapoor’s novel Age of Vice ... Swinging from the hovels to the palaces of contemporary India, this hypnotic story poses a horrible dilemma: For days, I was torn between gorging on Age of Vice or rationing out the chapters to make them last. Finally free from the book’s grip, now all I want to do is get others hooked ... This is a rare case of a book bounding as high as its hype ... Kapoor moves back and forth through time and up and down the social ladder. It’s a complicated but never confusing structure that unravels some mysteries while spinning new ones. Good as she is at ripping up the pages with acts of violence, she’s even more sly about pulling us into these characters’ lives ... Kapoor situates her story in the broiling nexus of India’s economic and political development ... Central to Kapoor’s success is her agile style. In long, winding backstories, her voice grows rich and evocative. But she is the master of broken sentences. Phrases sparking as fast as synapses ... Age of Vice is too well choreographed to be called sprawling. No, this is pure cunning.
Read Full Review >>
Mixed Dwight Garner,
The New York Times
A luxe thriller...that rides the line between commercial and literary fiction so adroitly that it will almost certainly move a lot of units, as I’ve heard publishers say about their best sellers ... It’s easy to see why attention has been paid. As a storyteller, Kapoor is a natural. Her novel offers the pleasures of narrative dexterity. It moves — early on, at any rate — as if on rails ... She does not offer, except rarely, the pleasures of subtlety. Over more than 500 pages, the book’s sleekness bends toward slickness and the magic toward tricks. Its length really hurts it. What might have been a crisp and moody entertainment, in Graham Greene’s elevated sense of that word, distends ... The characters (conflicted journalist, wealthy man’s dilettante son, wide-eyed boy from the sticks) are familiar. The politics are not delicate. A Mercedes rams into five poor people, including a pregnant woman, on the first page ... On Audible, the book might really lift the burden of a cross-country car trip. But it doesn’t make you a snob to want more from a novel than you would get from a good evening of Netflix. I kept reading, sometimes admiringly, but mentally I checked out around page 75 ... Kapoor has a cinematic eye. This novel has a lot of moments that feel lush and screenplay-ready ... She can be a perceptive writer, one who has plenty to say about modern Delhi and the conditions that spawned and that sustain the Wadia crime syndicate ... But as Age of Vice rolls on, the exigencies of plot trample whatever flowers, in the form of complexities, attempt to bloom.
Read Full Review >>
Rave Jake Arnott,
The Guardian (UK)
An impressively ambitious literary thriller ... An epic story ... With intricate yet plausible plotting, the book has all the energy of a high-concept crime thriller. What makes it compelling is the emotional intelligence of Kapoor’s characterisations ... Now seems a good time to examine the underbelly of India’s capitalist system from the inside, and Kapoor clearly knows her subject well. The feel of authenticity she brings to this fictional world gives it real political and moral weight ... The real suspense is found in the power dynamics that motivate the brutality, putting its players in constant jeopardy. Kapoor writes with a spare, hard-boiled style, fuelling the pace of her narrative but allowing for starkly lyrical touches as well.
Read Full Review >>
See All Reviews >>
SIMILAR BOOKS
Coming Soon

Victory City
Salman Rushdie
Rave
What did you think of Age of Vice?
© LitHub | Privacy