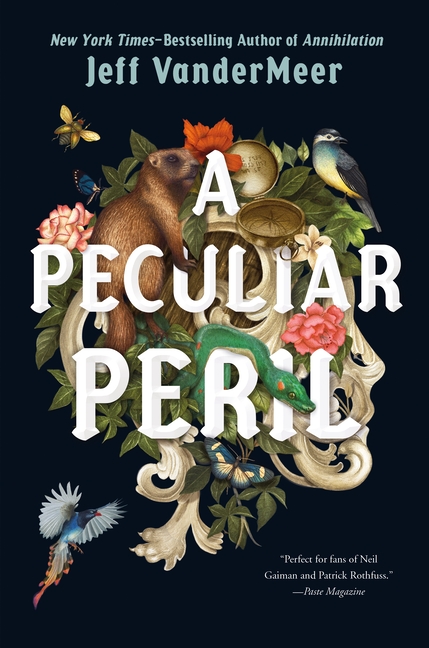 The first book in a two-volume fantasy about a teenaged boy who inherits his grandfather's mansion and discovers three strange doors, evidence his grandfather did not die of natural causes but spectacularly unnatural ones, and clues to the family's ties to an alternate Europe immersed in a war fought with strange tech and dark magic.

What The Reviewers Say
Rave Hunter Laird,
The New York Times Book Review
Picture a 200-foot-long death machine built to crush everything in its path — powered by pulped earthworms, defended by demi-mages and captained by the gently stoned 19th-century French novelist Jules Verne — and you will have glimpsed just the tiniest portion of the madcap magical mash-up that is Jeff VanderMeer’s first full-throated sally into epic young adult fiction ... It is, in sum, a heck of a lot of fun ... If VanderMeer skillfully marshals the plethora of moving parts in his novel, the occasional side plot and circumstantial weirdness can clank a bit, and one wonders if the whole might not have been compressed. Still, what would you cut: The demonic horse puppet that clamps itself to its owner’s arm and threatens to eat his face? The paperback-devouring push-up addict named Mack for the line of trucks he resembles? ... ew readers young and old will find VanderMeer’s foray into fresh territory a welcome port of entry to a wildly imaginative universe. Echoes there are aplenty, but there is no denying how exuberantly alive the whole feels.
Read Full Review >>
Positive Ian Mond,
Locus
VanderMeer’s vibrant worldbuilding and epic, parallel-reality spanning plot are supported by a cast of memorable characters ... There are the historical figures (Napoleon, Jules Verne, Franz Kafka) who are initially played for comedic effect but who each perform important roles in moving the story forward...Compared to these spritely individuals, Jonathan does regularly fade into the background. However, several major revelations about his family toward the back end of the novel provide an intriguing set-up for the next book in the duology ... does a terrific job broadening the scope of the Lambshead-Universe; and while it may lack the literary pyrotechnics of VanderMeer’s recent adult fiction, the novel pleasingly features his trademark sense of the weird, his fascination with bizarre environments and alien perspectives, and, of course, talking animals.
Read Full Review >>
Rave MICHAEL WELCH,
The Chicago Review of Books
Everything readers love about Jeff VanderMeer is on full display ... Even for an author known for creating some of the most memorable and important worlds in contemporary fiction, his newest journey into the alt-Earth known as Aurora is remarkable. Horror and humor blend...we are treated to a truly engrossing adventure ... But perhaps the best praise I can offer is that at a time when I needed an escape more than anything, A Peculiar Peril gave me that feeling of reading my first fantasy novel as a kid.
Read Full Review >>
See All Reviews >>
SIMILAR BOOKS
Fantasy

A Marvellous Light
Freya Marske
Rave
What did you think of A Peculiar Peril?
© LitHub | Privacy