A Partial History of Lost Causes 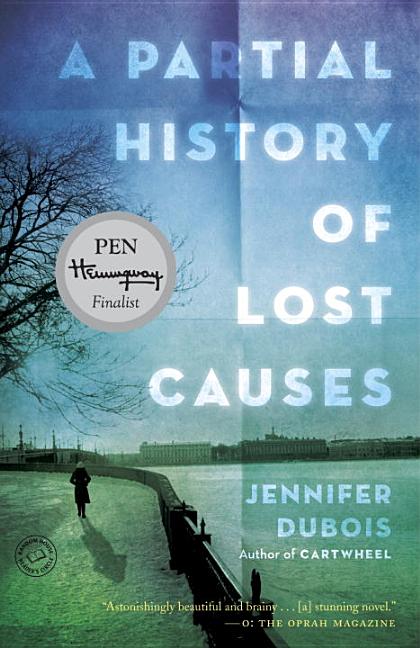 A long-lost letter links two disparate characters, each searching for meaning against seemingly insurmountable odds. In St. Petersburg, world chess champion Aleksandr Bezetov launches a dissident presidential campaign against Vladimir Putin, while in Massachusetts, an English lecturer, Irina Ellison, struggles for a sense of purpose. When Irina discovers a letter her father wrote to Bezetov, she leaves everything behind and travels to Russia to get an answer for her father, and for herself.

What The Reviewers Say
Rave Timothy Bracy,
Time Out
...an ambitious and remarkably assured work, one that adroitly achieves the daunting task of commingling love, chess, Russian politics and the ravages of terminal illness into a coherent and moving narrative ... Ultimately, the elegant placement of personal tragedy against a backdrop of social and political injustice recalls the dynamic tension of Milan Kundera’s The Unbearable Lightness of Being. That its characters remain humane, funny and relatable throughout a thorny tale of Eastern Bloc politics is a tribute to the author’s exciting, formidable talent.
Read Full Review >>
Positive LAURA BENNETT,
The New York Times Book Review
DuBois tells a tight story with boldface themes. Drama is constant. Conversations get right to the point. Everything means something. Chess is politics or sometimes war. Losing is dying. There are many gloomy musings on mortality and memory and love. But even with such high emotional stakes, Irina’s and Aleksandr’s self-absorption leaves the story somewhat cold ... They expend so much energy worrying about their fates that it feels almost redundant for us to do so ... But this is just the point duBois wants to make — that obsessing over your own end is a kind of vanity ... There are echoes of the Russia of Gary Shteyngart’s fiction here ... It’s a surprisingly happy ending for a book that purports to teach us how to live when the possibility of a happy ending is foreclosed.
Read Full Review >>
Positive Harvey Freedenberg,
Book Page
In a novel that conjures the Russian literary tradition, duBois weaves an intricate web of relationships among characters forced to confront difficult existential choices ... Though at times she overreaches for an arresting metaphor, duBois does an admirable job of portraying the death rattle of Communism and the birth of a nominally democratic but persistently corrupt society. She vividly captures the spirit of St. Petersburg and Moscow, not least the cloud of paranoia that hovers over both the old and new Russian worlds ... A deeply thoughtful novel, a pensive, multilayered look at a culture in transition and the lives of the two complex, memorable characters at its core.
Read Full Review >>
See All Reviews >>
SIMILAR BOOKS
Fiction

Kaleidoscope
Cecily Wong
Rave
What did you think of A Partial History of Lost Causes?
© LitHub | Privacy