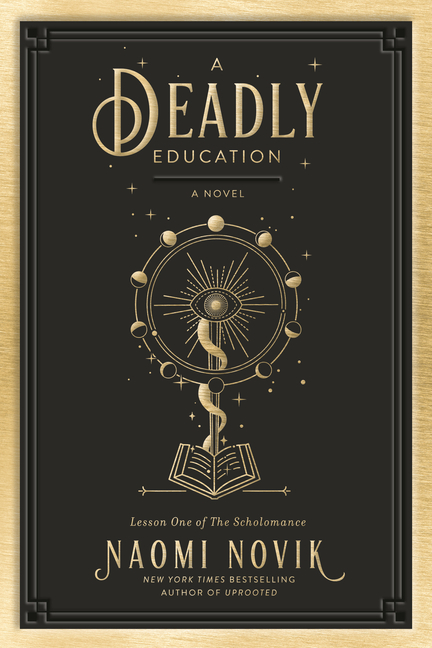 The students of Scholomance, a boarding school for sorcerers, must weather survival-of-the-fittest trials. Dark sorceress El (short for Galadriel) has a plan for how she’ll make it through the gates alive next year: she’ll learn to control her affinity for destruction, make allies by impressing other students with her abilities, and stockpile magical energy. But monster-slayer Orion Lake throws a wrench in the works.

What The Reviewers Say
Rave Amanda Diehl,
BookPage
... the can’t-miss fantasy of fall 2020, a brutal coming-of-power story steeped in the aesthetics of dark academia ... If you’ve been searching for the antiheroine of your dreams, El is a strong contender. There is something so cathartic about being in El’s mind, seeing the world through familiarly jaded and angry eyes. The thought of being able to wield her power even just for a second, and the confident way she nurtures and uses her abilities are the vicarious experiences many restless readers will appreciate ... Do not be fooled by the book’s high school setting and the presence of teen wizards, as this is very much an adult fantasy novel ... a wild ride that never ceases to yank the rug out from under readers. El is a heroine you want to root for over and over, while still worrying about what all this means for her future ... As a reader, nothing is more thrilling than discovering an author blessed with boundless imagination. A Deadly Education will cement Naomi Novik’s place as one of the greatest and most versatile fantasy writers of our time.
Read Full Review >>
Rave Suzanne Krohn,
Shelf Awareness
Intricate world-building, a nuanced and diverse cast and a thrilling plot culminate in the kind of pulse-pounding ending that resolves much, but sets up the next installment with unanswered questions and dangers both new and old ... delivers a heroine working hard to thwart a dark destiny. She's determined not to care what her classmates think, making her character arc--based on reluctant friendships and grudging alliances--satisfying, as is her growing mastery of her magical affinity. Novik somehow conjures up a heroine perched on the line between good and evil, a protagonist readers can cheer for even as they wait for her to dip her toe into the darker side of magic. A Deadly Education is a spellbinding start to Novik's new series.
Read Full Review >>
Rave Lucy Lockley,
Booklist
... the start of a fabulous dark and monstrous trilogy ... The final chapter in this fast-paced fantasy introduces new characters and a surprising conflict for the next book in the series, which offers a fresh take on the magic school trope.
Read Full Review >>
See All Reviews >>
SIMILAR BOOKS
Coming Soon

The Maker of Swans
Paraic O'Donnell
Positive
What did you think of A Deadly Education?
© LitHub | Privacy