A Dance with Dragons: A Song of Ice and Fire 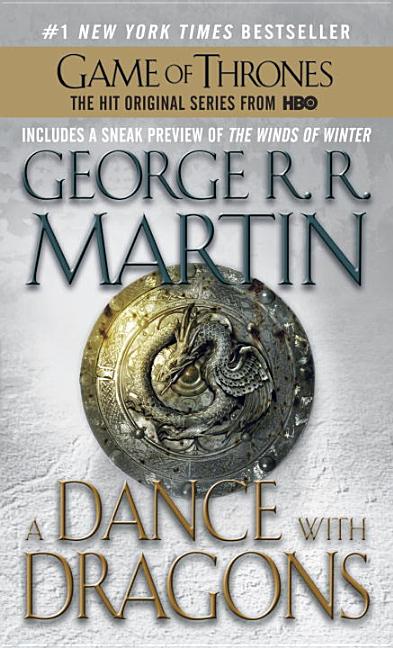 The saga that is the basis for the hit HBO Original Series Game of Thrones continues in Book Five, as both familiar faces and surprising new forces vie for a foothold in a fragmented empire.

What The Reviewers Say
Rave Dana Jennings,
The New York Times
Like its predecessors Dance has its share of flagons ’n’ dragons, and swords ’n’ sorcerers, but that doesn’t make Mr. Martin the American Tolkien, as some would have it. He’s much better than that ... Mr. Martin writes fantasy for grown-ups, with a blunt and bawdy earthiness ... The elements of fantasy exist here but are deftly muted, as Mr. Martin defies genre conventions. He’s often more intrigued by the friction among conflicting religions ... All the while his medieval realms ring with echoes of our own time, of our modern terrorscapes that rage with liars, spies and true believers ... Mr. Martin is a literary dervish, enthralled by complicated characters and vivid language, and bursting with the wild vision of the very best tale tellers ... like all proper serials it gives the reader no emotional respite, ending with several razor-sharp question marks as the heavy wheels of fate groan into motion, and the murders and assassinations mount ... the reader is whipsawed by cliffhanger after cliffhanger, while being all too aware that Mr. Martin’s next installment won’t be coming out next week, or even next year for that matter.
Read Full Review >>
Rave Bill Sheehan,
The Washington Post
A Dance With Dragons brings back several prominent figures who have not been seen directly since A Storm of Swords appeared in 2000. The most welcome of these is Tyrion Lannister, the sardonic dwarf who is perhaps Martin’s most vivid creation ... Any player, however important, can be removed from the board at any moment. This simple fact lends a welcome sense of uncertainty to the proceedings and helps keep the level of suspense consistently high throughout. Filled with vividly rendered set pieces, unexpected turnings, assorted cliffhangers and moments of appalling cruelty, A Dance With Dragons is epic fantasy as it should be written: passionate, compelling, convincingly detailed and thoroughly imagined. Despite a number of overtly fantastic elements (dragons, seers, shape shifters and sorcerers), the book—and the series as a whole—feels grounded in the brutal reality of medieval times and has more in common with the Wars of the Roses than it does with The Lord of the Rings. The result is a complex summer blockbuster with brains and heart, a book with rare—and potentially enormous—appeal.
Read Full Review >>
Rave Jo Walton,
Tor.com
I was so completely wrapped up in what was happening to everyone that I was only looking up to grunt ... This is a terrific book ... One of Martin’s real strengths...is getting inside the heads of characters and making them seem real ... There’s death and betrayal and dragons and duty and history and complications and pride. These are things nobody does as well as Martin—things I think of as Shakespearean. Council scenes that set up huge complicated betrayals and battles. Heroism and treachery. And you see so much of it from inside people’s heads that it all feels absolutely real and grounded, even the most melodramatic moments ... if you’ve enjoyed the series so far and you’ve been waiting for this volume, then I feel confident in saying that you’re going to love it.
Read Full Review >>
See All Reviews >>
SIMILAR BOOKS
Coming Soon

Ordinary Monsters
J M Miro
Positive
What did you think of A Dance with Dragons: A Song of Ice and Fire?
© LitHub | Privacy