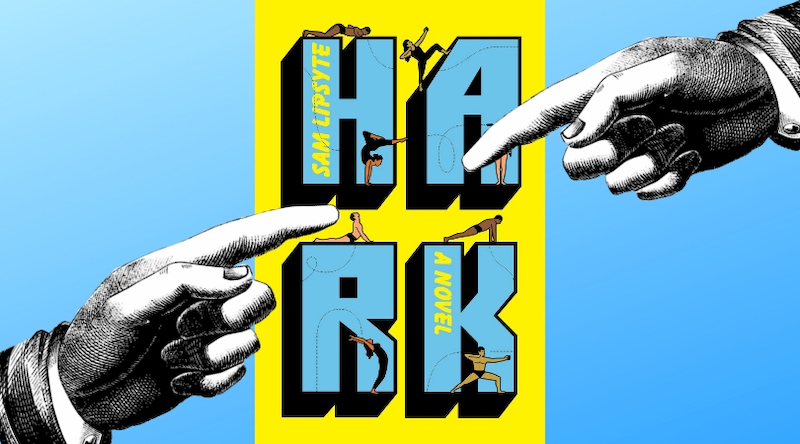 This week on the chopping block/massage table it’s acclaimed social satirist Sam Lipsyte’s latest novel, Hark: a send-up of our contemporary culture centered around an unwitting self-help guru named Hark Morner and the phenomenon he initiates. In a near-future America roiled by political discord, environment collapse, and spiritual confusion, Hank’s technique of “Mental Archery” looks set to captivate the desperate masses. But has the book captivated the critics?

Well, the response so far has been decidedly mixed. Josh Tyrangiel, writing in the New York Times Book Review, found the first half to be “extremely funny” and brilliantly alive” but felt that Hark himself was “a great idea and a lousy character” and that the story unravelled in the second half. Kevin Canfield of the Minneapolis Star Tribune had a more positive experience of the novel, arguing that “although its plot gets a little shaggy—there are betrayals, crimes, geopolitical chaos—Hark is a tartly effective sendup of 21st-century America.”

Our battling reviews for this week, though, come from David O’Neill in 4Columns (“Lipsyte’s sentences are the thing. They can go anywhere and be anything, except boring”) and A. O. Scott in the Atlantic (“Lipsyte often seems trapped in a voice and sensibility that he no longer entirely believes in.”)

“If you’d rather follow a tight-knit plot than luxuriate in conspicuously deluxe prose, Hark may not be for you … [Lipsyte’s] sentences are the thing. They can go anywhere and be anything, except boring … That’s not to say there’s no story in Hark, but it’s loose—a series of wild set pieces … Irony becomes sincerity that doubles back, eating its own tail. It’s a style that only works with prose of the highest caliber—fluid and alert, deeply moral, unafraid to be lyrical or detour into the rudest humor. The satire is 10Xed, vicious and humane because the author’s self-recognition is clear. In Hark, little shards of phrase gleam with goofy malice, as Lipsyte perfectly embodies an exasperated Gen Xer enduring these ridiculous, teeth-gritting times … Hark’s sendup of human greed, stupidity, and pathetic pre-apocalyptic longing delivers real empathy in an era of fake concern … Flashes of this regard dot Lipsyte’s riotous novel like stars, bright and isolated. It’s not like compassion can save us. But it is something to focus on.”

“The universe of Hark looks pretty familiar, although politics, the bane and boon of most contemporary satirists, receives little more than a lazy, glancing shot … Lipsyte often seems trapped in a voice and sensibility that he no longer entirely believes in. Focus, the attribute Hark champions above all else, is what Hark lacks. Its attention splinters among half a dozen characters, none of whose dramas quite commands the reader’s full engagement … Reading Hark can feel like being trapped in the writers’ room of a sitcom two seasons past its prime, except that the staff members desperately trying to top one another and laughing at their own jokes are all the same guy … Most of all, the gestures toward Major Novel status in Hark—Pynchony, Lethem-esque names like Hark Morner and Fraz Penzig, Dieter Delgado and Teal Baker-Cassini; Infinite Jesticles in the form of wacky brand names and inscrutable terrorist organizations; intimations of apocalypse that accelerate in the book’s final pages—have an air of desperation … Lipsyte’s writing has a habit of disappearing up its own…never mind … I have nothing but sympathy for the [political and social] predicament out of which this book arises, and nothing but impatience with its way of addressing that predicament … A metaphor may be a place for cows to graze, but this is bullshit.”