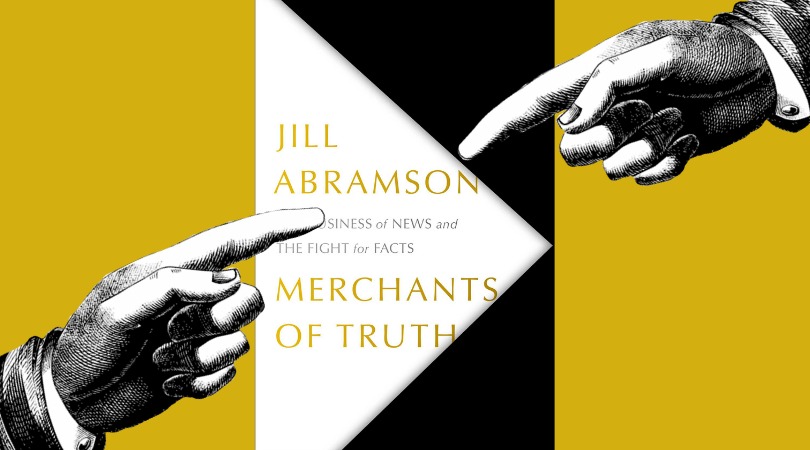 A damn good read or an empty hot-take?

This week under the Point/Counterpoint microscope, it’s Jill Abramson’s scandal–plagued exploration of the state of U.S. journalism: Merchants of Truth. Abramson, the former New York Times executive editor, focuses her attention on two legacy newspapers (The Washington Post and The New York Times) and two digital upstarts (Buzzfeed, and VICE), pitting old and new media against one another. 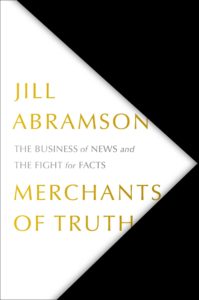 Could the weakened traditional news organizations still carry on the mission the Founders intended for a free press?
Had the shiny rewards for entertaining the public eclipsed their duty to inform?

“It’s partly a memoir and partly a work of investigative reporting. But it’s mostly an audit of an industry that has spent much of the past decade wetting its pants in fear of digital technology and then worrying about whether to go to the dry cleaners. And it’s a damn good read … he has a keen eye for the central irony at the core of Vice. The company created branded content for giant advertisers—and killed stories that criticized them—at the same time that it cultivated an image of rebellion. It was giving the Man the finger while simultaneously massaging his back … It’s the ultimate irony: Jill Abramson was, indirectly at least, fired because of her resistance to the ‘innovation report.’ And now she’s produced a marvelous book about exactly how prescient the darn thing was.”

“Merchants of Truth recounts the divergent paths of four news organizations—The New York Times, The Washington Post, BuzzFeed, and Vice—in response to the pressure. In this sense, by starting the journey at an exclusive cocktail party in Washington, Abramson shows her hand … It’s the same horror show that many titans of the old guard have already described in black-and-white terms … But she evaluates the strategies for doing so using some of the same assumptions that contributed to the predicament in the first place. The end result is a series of journalistic purity tests that no one could honestly pass, even if they wanted to … Abramson’s frequent criticism of BuzzFeed and Vice seems to revolve around the fact that neither attempts to emulate the Abramson-era New York Times … This is, in digital parlance, a hot take. There is little evidence to back it up. And that speaks to the fundamental tension in Abramson’s book: Are the real merchants of truth those who are prepared to see journalism as a living organism—one that’s cognizant of financial compromises, reflective of political reality, and responsive to cultural shifts? Or should they rather pay homage to at-times calcified ideals, as if journalism were nothing but a monument to better days?”