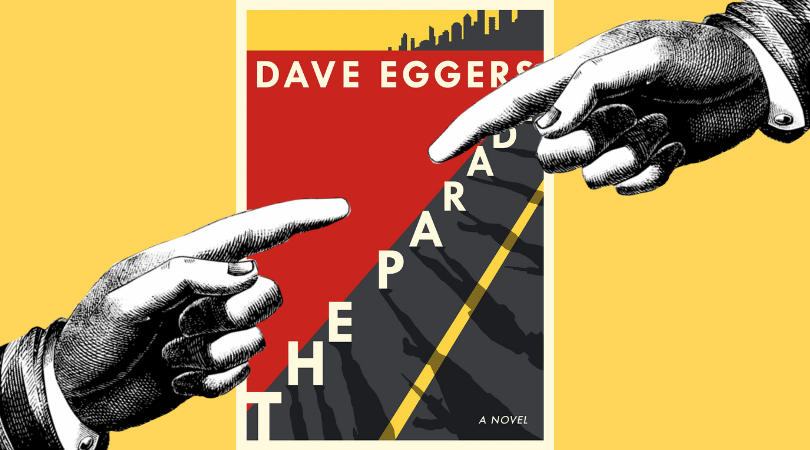 Dave Eggers has had a pretty prolific career. While he is best known for his acclaimed 2000 memoir, A Heartbreaking Work of Staggering Genius, as well as for novels like What Is What and The Circle, Eggers has also published children’s books, short stories, and even collections of animal portraits. Whatever genre he’s working in, though, his books, whether fiction or nonfiction, tend to take on topical issues.

In his latest novel, The Parade, two unnamed men are sent to finish a government road in a country that has been ravaged by civil war; they begin to question whether they can ever truly understand what the locals have been through and what their role in the healing process is. Overall, The Parade has been met with pretty mixed reviews. Today, we’re turning our attention to Booklist for Donna Seaman’s praise and prediction that “requests will pour in.” In stark contrast, we’re also looking at David Canfield’s Entertainment Weekly assessment, in which he calls the novel “a narrative assembled from crocodile tears.”

In the past, in other nations, the company’s employees had been ransomed and killed …
But without passports or names, men like Four and Nine were anonymous and of little value.

“Clearly things will go awry, but how and how badly? The ever-incisive, wordly-wise, compassionate, and imaginative Eggers (The Monk of Mokha, 2018) maintains the tension of a cocked crossbow in this magnetizing, stealthily wry, and increasingly chilling tale of First World corporate mercenaries way out of their element … Requests will pour in from Eggers’ many fans as well as devotees of concentrated and suspenseful works of culture-clash fiction.”

“The Parade finds worthy areas of inquiry in its slim, spare telling, yet Eggers all but rejects the principles of good storytelling. Billed as a novel, The Parade reads more like an extended short story, reserving its knife-turn for the final page and plodding until then … Eggers treats this morality play like a plastic wind-up toy. He introduces simplistic main characters before planting a set of obstacles on their predestined paths … Eggers’ embrace of the saccharine had me waiting, begging for the cynical hammer to drop … Eggers’ writing in The Parade is fine — often lovely in its attention to physical detail, utterly lacking in soul. The allegorical nature of the prose hints at weighty complexity, but what materializes ranges from a college term paper steeped in pessimism to a narrative assembled from crocodile tears … the author’s latest is hardly eye-opening in the way fiction can and should be. Eggers is good enough to know better.”