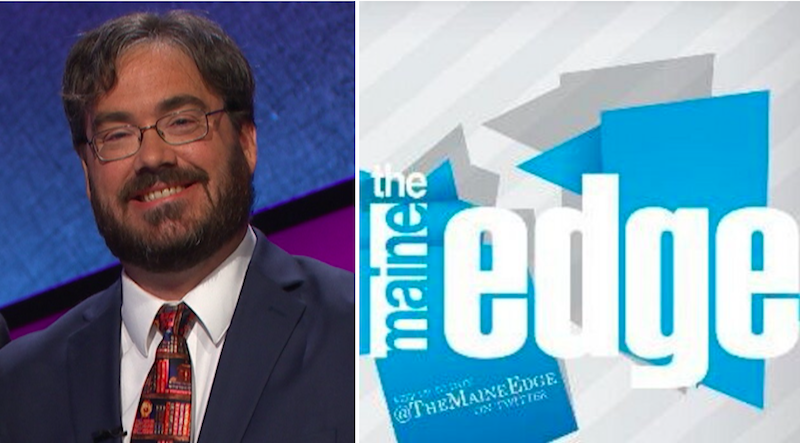 Omnivorous Reading, Reimagined Shakespeare, and The Hitchhiker's Guide to the Galaxy

The Maine Edge editor Allen Adams talks reinterpreting the Bard, his favorite cultural critics, and the funniest book of the 21st century

This week we spoke to editor and lead culture critic of The Maine Edge, Allen Adams. 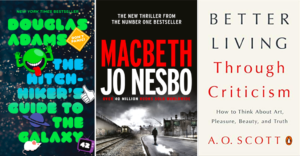 Allen Adams: Oh wow. This is one of those questions that I’d probably answer differently from day to day. Heck, from moment to moment. Do I lean into my deep affection for counterculture fiction of the ‘60s and ‘70s and pick something like Another Roadside Attraction by Tom Robbins? Do I indulge my love of Kurt Vonnegut and review Breakfast of Champions (which I would, well, champion as the author’s best)? Do I choose between my two college-years literary obsessions (A Confederacy of Dunces and Infinite Jest)?

Right now, the book that leaps to mind is The Hitchhiker’s Guide to the Galaxy. Douglas Adams’ comic sci-fi masterpiece is one of the funniest books of the 20th century, full stop. To get the chance to discover that book in real time, to see how it translated to the page from its radio show origins, to experience the galaxy through the eyes of an unassuming and perfectly average guy—magnificent. Adams completely upended the expectations of what science fiction can be through sly subversion, a keen satiric voice and a quintessentially British wit. The realization that you’re reading something altogether new as you’re reading it is a precious and rare gift for any reader, critic or otherwise; that’s what Hitchhiker’s gives us.

Frankly, I may be choosing this answer simply because I’d like another chance to read it for the first time—but really, isn’t that a great reason?

AA: This is probably cheating, but can I just do the whole Hogarth Shakespeare series? I mean, one of the books—Jo Nesbo’s Macbeth—came out last year, so technically it counts, right?

As someone who has spent significant time with the Bard on both page and stage, I’ve experienced a lot of takes on Shakespeare’s classics—I played an overall-clad Jacques in an Appalachian As You Like It, just as one example. But I’ve never seen such a broad and sweeping commitment to the literary reimagination of his works as this. It’s such an audacious and fun effort; the cultural familiarity with these stories allows for a certain degree of flexibility regarding the choices being made.

The books have been uneven, to be sure—I think my personal favorite is Tracy Chevalier’s New Boy, a 1970s schoolyard take on Othello, though Margaret Atwood’s Hag-Seed (based on The Tempest) is up there as well; your mileage may vary—but even the less-successful offerings make for worthwhile reading, as experiments if nothing else. And across the board, the quality of the writers taking part is sky high. I’m always inclined to give credit to those willing to take big swings—and swings don’t come much bigger than this.

“Unheralded” is probably a bit strong, but I do feel like these books deserve even more attention than they’ve received.

AA: That we see ourselves as somehow above popular and/or genre work. My reading habits have tended toward the omnivorous since I was a kid; that hasn’t changed just because I now write about the books that I read. I’m as comfortable reviewing the latest best-selling blockbuster or sci-fi series as I am digging into a work of “literary fiction”—and I believe the vast majority of my peers feel the same way. I have yet to personally encounter an ivory tower-type critic in the wild; that isn’t to say that there are none, but they’re pretty thin on the ground. For most of us, our love of books is sweeping rather than stilted—how they’re labeled doesn’t really matter.

AA: For someone like myself, who does the majority of their work for a small-circulation outlet, social media has been a huge boon—without the reach of social media and other internet portals, the odds of my work gaining any sort of foothold would be slim. The added reach makes it easier for someone like me to devote time and resources to reviewing books beyond the standard list-toppers and works by local authors.

Beyond just the significant uptick in potential audience engagement, the connections that can be made, whether they be with authors, publishers or fellow critics, allow for an exponential expansion of the literary world’s footprint. More voices lead to a bigger conversation, and while bigger doesn’t always equal better, there’s something to be said for adding more seats to the table.

To be sure, I’ll concede that social media’s influence on the realm of book criticism hasn’t been uniformly positive, but it’s tough to argue that the pros don’t outweigh the cons.

AA: As far as book critics specifically, it would probably be easier to list critics I DON’T enjoy reading—there are scores of talented folks out there at outlets large and small. To draw just one example, Joan Silverman is someone who consistently produces criticism that captures my attention. Almost every piece of hers that I read causes me to reconsider or otherwise dig deeper into an impression or idea that I had about a book. Ron Charles, Laurie Hertzel, Katharine A. Powers—the list goes on and on. Honestly, there are a multitude of folks whose work I dig, people whose passion for the page is palpable.

In other arenas, I’m a big fan of A.O. Scott’s work. I always find his film criticism to be thoughtful and well-reasoned, even (or perhaps especially) when I disagree with him. Plus, his book Better Living Through Criticism is one of the 21st century’s best works regarding the value of cultural criticism. Alan Sepinwall’s television writing is indispensable for anyone the least bit interested in the golden age of TV. On the podcast side, few are as steadily smart and funny as The Ringer’s The Big Picture.

Allen Adams is the editor and lead culture critic for The Maine Edge, an alt-weekly based in Bangor, Maine. His reviews of books, films and more have appeared there and elsewhere over the past decade. He is a member of the National Book Critics Circle and former member of the National Sports Media Association. Allen is also a Tomatometer-approved film critic and a “Jeopardy!” bronze medalist. He lives in Bangor. @allenadamsME