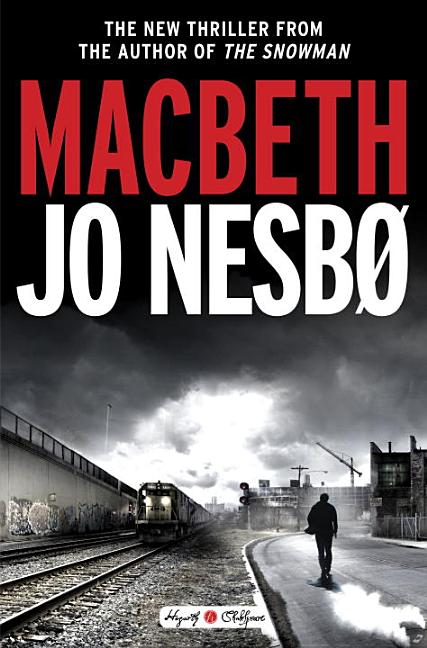 Shakespeare's celebrated tragedy gets an update, reimagined as a noir police drama set in a down-on-its luck, drug-addled industrial town during the 1970s.

What The Reviewers Say
Positive Dennis Drabelle,
The Washington Post
On the whole...Nesbo manages the balancing act of being true to the original play without slighting his own interests as a writer: bleak settings, loyalty (or the lack thereof) among crooks, clever escapes from tight spots, the affinities between policemen and the criminals they chase ... Nesbo has repaid what may have been a wild hunch on the part of his publisher.
Read Full Review >>
Positive James Shapiro,
The New York Times Book Review
One of the pleasures of reading this book is watching Nesbo meet the formidable challenge of assimilating elements of the play unsuited to realistic crime fiction, especially the supernatural: the witches, prophecies, visions, and the mysterious figure of Hecate ... placing Shakespeare’s story in a late-20th-century world of drugs, gangs and corrupt civic leaders goes a long way toward solving this problem. 'Brew' — the term used for the drug to which so many are addicted — is at the heart of Nesbo’s novel and neatly straddles the murky world of Shakespeare’s witches, with their caldron, and that of modern drug labs. By making addiction so central to his plot, Nesbo also makes Macbeth’s paranoia and hallucinatory visions, so crucial to Shakespeare’s play, not just believable but meaningful in a contemporary way ... Gang warfare also informs Nesbo’s retelling and is well suited to the extreme violence of Shakespeare’s original, in which the fighting that is described and staged is ferocious ... In the end, he offers a dark but ultimately hopeful Macbeth, one suited to our own troubled times, in which 'the slowness of democracy' is no match for power-hungry strongmen who demand unstinting loyalty from ethically compromised followers, and where the brave must band together to defeat the darker forces that threaten to destroy the social fabric.
Read Full Review >>
Positive Bethanne Patrick,
NPR
As the action ratchets up, readers may notice that this Macbeth entertains best when it veers off from Shakespeare's plot. Nesbo does what he does very well: The crazy drug bust that goes sideways proves this (it also makes Macbeth a hero, which later will prove equally crazy). What Nesbo doesn't do very well is discern the point of Shakespeare's tragedy. There's so much action that readers will be hard put to decide what matters most, the corruption of a community, or the rotting of a relationship ... While Nesbo's adaptation sings when he departs from the original script, it also takes him farther from the original's core, a tragedy in which hubris takes down the protagonist ... Which isn't to say there isn't a lot to like. Nesbo fans won't care one bit about the un-Shakespearean aspects of his Macbeth. They'll be rapt watching Macbeth grow more and more venal, like Walter White in Breaking Bad ... In other words, Nesbo has adhered to his contract, delivering a book that plays off of Shakespeare's work but succeeds as his own. Will readers love it or hate it? That depends on why they read it.
Read Full Review >>
See All Reviews >>
SIMILAR BOOKS
Literary

Please See Us
Caitlin Mullen
Rave
What did you think of Macbeth?
© LitHub | Privacy