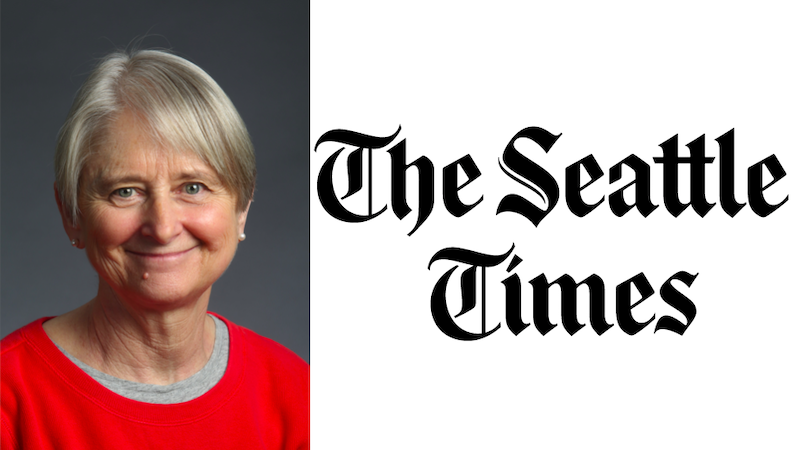 "Every time a regional paper folds, that means that regional authors’ worthy books will go uncovered"

This week we spoke to Pulitzer Prize-winning Seattle-based critic, and former books editor of the Seattle Times, Mary Ann Gwinn.

Mary Ann Gwinn: I was part of the Vietnam protest generation, and I loathed Lyndon Johnson for his support of the war. So Robert Caro’s first installment in his Lyndon Johnson multi-volume biography, 1982’s The Path to Power, was a revelation. After reading about Johnson’s poverty-wracked childhood in the Texas hill country he became human to me—I was able to understand his championing of civil rights legislation and anti-poverty programs as something he really believed in, not just a political attempt to manage John F. Kennedy’s legacy. Caro’s book made me realize that even very flawed people can do a lot of good. I doubt I would have had the perspective to review it when it was published, but it opened my eyes to the power of narrative nonfiction.

In the fiction world, I think it would have been a gas to review Dracula when it came out in 1897. I’ve read it a couple of times, and it’s so creepy; because it’s told through letters and dispatches written by different characters, you never quite know what’s going on, but you know it isn’t good! I bet it knocked the Victorians flat.

MAG: Mark Braude’s The Invisible Emperor: Napoleon on Elba from Exile to Escape covers one pivotal year in Napoleon’s life. It is a wonderful cat-and-mouse story, as Napoleon outmaneuvers his enemies, manages a complicated love life and plots his escape, all while appearing to humbly submit to exile on the island of Elba. Braude made me feel like I was there, elbow to elbow with Napoleon as he dissembled, seethed, and strategized. It has a cast of eccentric characters, is wonderfully funny and comes in at under 300 pages. I read a review that criticized it for being too short! Not a problem for me.

Adam Nicolson’s The Seabird’s Cry is an eloquent meditation on 10 species of seabirds—puffins, gulls, cormorants, albatrosses, shearwaters and so forth—and what’s happening to them because of climate change. He doesn’t romanticize the birds—some of their social behavior is shocking!—but his writing about their amazing feats of flight and their wind-scoured habitats is transcendent. This book deserves a much wider audience.

MAG: Seattle is a well-read town; we have more than a dozen independent bookstores, a major university, several robust lecture series and two wonderful public library systems. Oh, yes, Amazon is headquartered here. Seattle readers do share one thing in common with readers all over—they are often surprised that I haven’t read the latest hot book, say, Michelle Obama’s Becoming. My job isn’t to read and critique books people already know about; it’s to find the extraordinary books they don’t know about.

MAG: The best thing about social media is that it has united a community of book lovers unconstrained by geography. Today I can post a review on Facebook; friends I grew up with in Arkansas read the review and order it online, because the nearest bookstore may be at least 100 miles way. Believe me, that’s progress.

The worst thing is that social media has an insidious influence on commentary; there’s a temptation to give a book either more praise or more blame than it deserves, so someone will click on the headline and READ THE DAMN REVIEW.

No, that’s not the worst thing; the worst thing is that the Internet and social media (yes, Facebook) have destroyed the business model for regional newspapers. Every time a regional paper folds, that means that regional authors’ worthy books will go uncovered, because they will never have a prayer of notice by the New York Times or the Washington Post, never mind the New Yorker or the NYRB. This is the reason author Stephen King mounted a successful campaign to save book reviews in the Portland Press Herald, Maine’s largest daily newspaper. He is my hero.

Laura Miller, particularly her nonfiction reviews for Slate and other publications.  I always learn something from them, even if I’ve already read the book.

Charles Finch writes reviews that are a marvel of erudition, economy and humor, but he can get to the core of what is wrong about a book quicker and more succinctly than anyone else I know.

I read Zadie Smith’s book reviews for Harper’s in Feel Free, her new essay collection, and was so charmed and impressed I just wanted to give up. But I got over it.

Mary Ann Gwinn lives in Seattle. She was the book editor of the Seattle Times for 18 years and continues to write regularly for the Seattle Times, Newsday and other publications. She’s the vice president/secretary of the National Book Critics Circle and has chaired the NBCC’s nonfiction and biography committees. A working journalist for many years, she won a Pulitzer Prize for National Reporting for her contribution to the Seattle Times’ coverage of the Exxon Valdez oil spill.