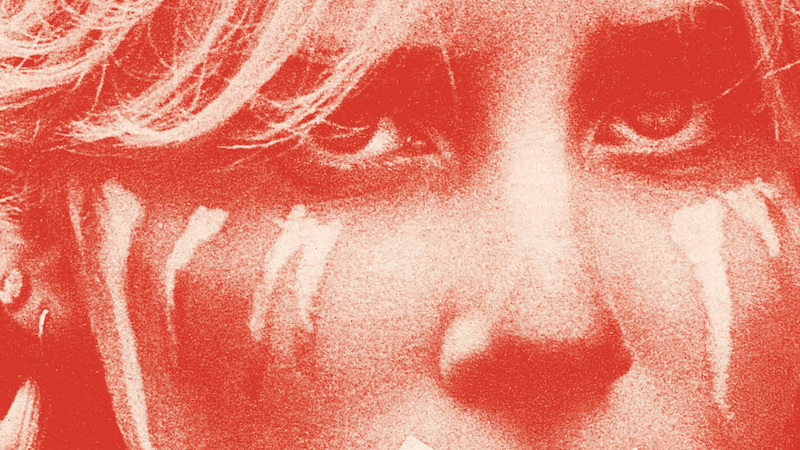 A White-Hot Ember of a Book: Rachel Kushner's The Flamethrowers

Last week saw the release of Rachel Kushner’s much-anticipated new novel, The Mars Room—the story of a young woman serving a double life sentence in a central California correctional facility for the murder of her stalker.

The book has already garnered a fair share of rave reviews, with The Boston Globe calling it “stunning and surreal,” Bookforum hailing it as “a gorgeous, contemplative slow ride,” and the New York Times likening it to “a muscle car oozing down the side roads of your mind.”

With Kushner’s fiction back in the spotlight, we thought the time was right to take a look back at the first reviews of her most famous work to date: 2013’s The Flamethrowers. One of the great New York novels of the 21st century, it’s the tale of a young artist and the worlds she encounters in Manhattan and Rome in the mid-1970s—by turns underground, elite, and dangerous. 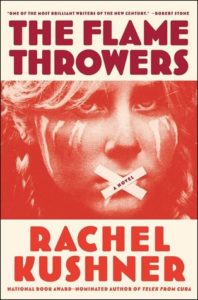 “The Flamethrowers unfolds on a bigger, brighter screen than nearly any recent American novel I can remember … The Flamethrowers is a coming-of-age novel of a sort, one that has dozens of topics on its mind: speed and sex, reality and counterreality, art and intellect, politics and fear and perhaps, above all, ‘the fine lubricated violence of an internal combustion engine’ … Reno is a persuasive and moving narrator because Ms. Kushner allows her the vulnerability and fuzzy-mindedness of youth while rarely allowing her to think or say a commonplace thing … Ms. Kushner has long since burned down whatever resistance you might have toward her talent or her narrative.” 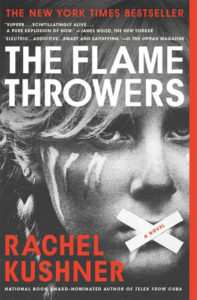 “The Flamethrowers is scintillatingly alive, and also alive to artifice. It ripples with stories, anecdotes, set-piece monologues, crafty egotistical tall tales, and hapless adventures: Kushner is never not telling a story … It catches us in its mobile, flashing present, which is the living reality it conjures on the page at the moment we are reading … Kushner employs a similarly eerie confidence throughout her novel, which constantly entwines the invented with the real, and she often uses the power of invention to give her fiction the authenticity of the reportorial, the solidity of the historical … Kushner watches the New York art world of the late seventies with sardonic precision and lancing humor, using Reno’s reportorial hospitality to fill her pages with lively portraits and outrageous cameos.” 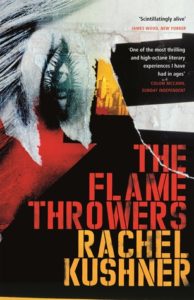 “The Flamethrowers is a political novel, a feminist novel, a philosophical novel, a sexy novel, and a kind of thriller in which most of the intrigue occurs opaquely offstage … The Flamethrowers has a fearless experiential and geographic promiscuity, traveling from the mind of a motorcyclist about to crash on the Utah salt flats to a hideous artists’ dinner in Downtown Manhattan to a Roman riot and to the night of the 1977 New York City blackout … Virtually every page contains a paragraph that merits — and rewards — rereading…you read one of Kushner’s thunderclap sentences and you remember that sometimes, in fiction, hearing the thunder means standing for a little while in the rain.” 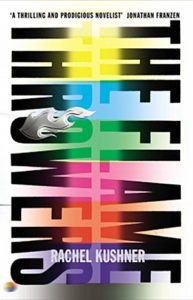 “A white-hot ember of a book that takes place in Manhattan and Italy in the late 1970s, a time when each was awash in turmoil. This both is and isn’t the point of the novel … The Flamethrowers begins with a remarkable set piece in which the character rides a motorcycle west from New York to Utah’s Bonneville Salt Flats, where she wipes out while trying to challenge a land speed record. For Reno, though, speed is just a catalyst; her real purpose is to photograph the traces left by her bike upon the earth … The implication is that art is, or should be, a provocation, that even the most abstract expression exists in (sometimes) violent reaction to the world … The idea is to think of the novel as a reflection of both character and culture, as well as the uneasy ways they intersect.” 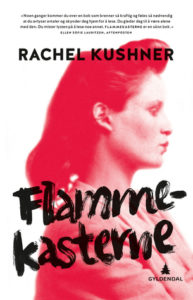 “The Flamethrowers is about machines (motorcycles and guns, but also cameras) and the way they revolutionized the last century (its politics and violence, but also its art) … The story of the Valera family is told in discrete, occasional flashbacks—patches of what might have been an epic, if a novelist today could write an epic of capitalist triumph and keep a straight face … The social codes of Kushner’s ’70s Manhattan aren’t too far removed from those of today, except without the cell phones and with a bit more gun fetishizing than you find lately on Broome Street … [Kushner’s] most charming quality is a willingness to digress and to stage long set pieces, at parties and in bars, in which her more eccentric characters are allowed to talk, and talk, and talk.” 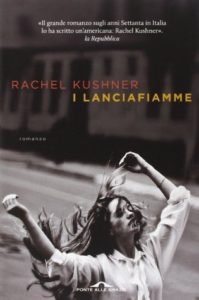 “The Flamethrowers is a high-wire performance worthy of Philippe Petit. On lines stretched tight between satire and eulogy, she strolls above the self-absorbed terrain of the New York art scene in the 1970s, providing a vision alternately intimate and elevated … Kushner’s seductive prose is never truly surreal, but she doesn’t present Reno’s adventures in chronological order, which reflects the dreamlike flow of her experiences … The breadth of Kushner’s historical and critical knowledge could be oppressive if this weren’t such an alluring performance. What really dazzles, though, is her ability to steer this zigzag plot so expertly that she can let it spin out of control now and then.” 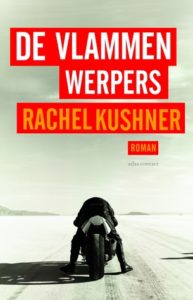 “Kushner confidently manages huge swaths of politics and history, intersecting them with the personal lives of her characters, often through cultural or commercial motifs. And she draws interesting, wildly smart parallels between the cultural-political chaos of New York and Italy in the ’70s, with Little Italy serving as a distorted mirror of defunct Old World values … But the delights of Kushner’s writing cannot entirely compensate for the novel’s ultimate loss of momentum. This is due, in part, to the ill-fated couple’s unsurprising denouement, but it also results from the confusing sequencing in the last third of the book.” 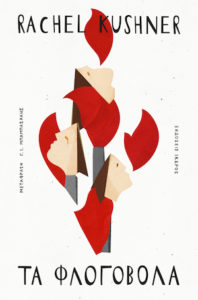 “Kushner stages a series of failures as her characters attempt to engage with larger social histories…they keep trying, but failing, to mine their attentiveness to work and relationships not only for daily sustenance but for broader, shareable understanding too … If conventional novels represent individual voices as important elements of a wider social dialogue, Kushner turns the convention on its head. Rather than defend her characters’ relevance, she has them struggle toward the realization that their lives might not be very relevant or exemplary after all—and that even they can learn little from what happens to them … Kushner does not indulge in a liberal fantasy that the individual and the private are the most important dimensions of social knowledge—or in the converse Marxist fantasy that one can explain individual experience through larger social systems. Instead, her sheltered characters convey a hesitation about the extent to which our private lives can be meaningful interventions into loftier historical narratives.” 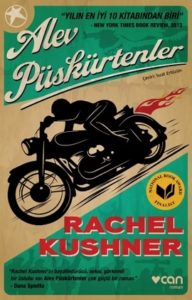 “Reno, the narrator of The Flamethrowers, is a protagonist who is memorable less for her observations than for her obsessions … Despite its premise, The Flamethrowers is not a love story. Nor is it really a novel about art. For Reno, love and art are vestigial of the deeper desire to transgress the unknowable, the unsaid, the limitless — to stand at the edge of fear … For Reno, her desire is as insatiable as it is irrepressible, and it’s when Kushner describes Reno’s fervor when the novel’s prose reaches its highest degree of erotic intensity … The Flamethrowers is essentially a feminist novel, more than it is a political novel, or a novel about art.” 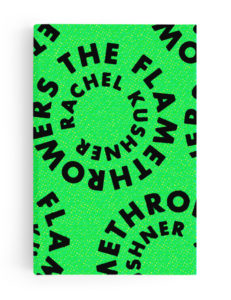 “Rachel Kushner’s brilliant lightning bolt of a novel, The Flamethrowers, straddles two revolutions: the squatter-artist colonization of Manhattan’s SoHo in the 1970s, and the rise of Italy’s radical left during the same period … The Flamethrowers is an entire world, intimately and convincingly observed, filled with characters whose desires feel true. It is also an uncannily perceptive portrait of our culture — psychologically and philosophically astute, candid about class, art, sex and the position of women — with a deadly accuracy that recalls the young Joan Didion, and that, despite the precisely rendered historical backdrop, gives the story a timeless urgency.”