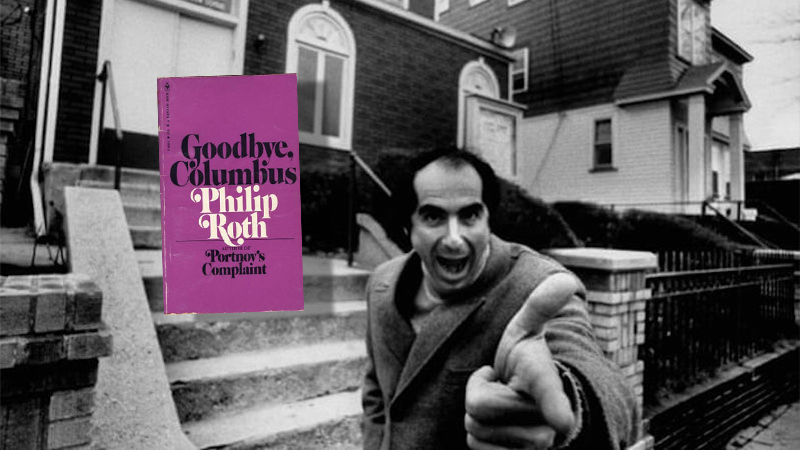 The upcoming release of Blake Bailey’s hotly-anticipated doorstopper biography of the late literary titan (and perennial Nobel bridesmaid) Philip Roth has us thinking a lot about the New Jersey novelist’s massive body of work (which consisted of twenty-seven full-length works of fiction over a fifty-year career) and about the book that started it all.

The bitingly-irreverent Goodbye, Columbus—a novella and five stories about second and third generation assimilated American Jewish men striking out on their own—was published to critical acclaim (and no small amount of controversy) in 1959, eventually winning its young author (still in his mid-twenties at the time) the National Book Award for Fiction in 1960.

Below is one of the the very first reviews of the book, published in the New York Times Book Review over sixty years ago, in which the critic dubs Roth “…a good story-teller, a shrewd appraiser of character and a keen recorder of an indecisive generation.” 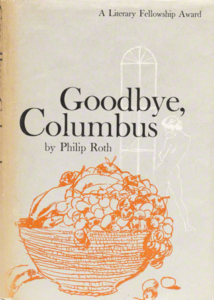 How far back must you go to discover the beginning of trouble?

“Some years ago, in the vanguard of the Southern literary renascence, Ellen Glasgow commented that what the South needed was ‘blood and irony.’ The same might be said of some recent writers who have concerned themselves with depicting the role of the Jew in American society, which is the subject of Philip Roth’s collection of short stories and a novella. An English instructor at the University of Chicago, 26-year-old Mr. Roth has published fiction in Harper’s, The Paris Review, The New Yorker and other periodicals. Goodbye, Columbus, a Houghton Mifflin Literary Fellowship Award, is his first book, and an impressive one. There is blood here and vigor, love and hate, irony and compassion.

Mr. Roth’s novella is a somewhat incongruous mingling of conventional boy-meets-girl material and portrait-of-the-intellectual-as-a-young-man, narrated with an occasional fondness for clinical detail reminiscent of Edmund Wilson’s ‘The Princess With the Golden Hair.’ Young Neil Klugman meets beautiful, wealthy Brenda Patimkin, a Radcliffe undergraduate. Neil pursues Brenda with the determination of a well-trained bird dog, and soon catches her. After a summer love affair, he rejects Brenda and the nouveau-riche Patimkins with the smug self-righteousness of Joyce’s Stephen Dedalus.

Such a summary, however, does justice neither to the author nor to his people; out of such hackneyed materials Mr. Roth has written a perceptive, often witty and frequently moving piece of fiction. He is a good story-teller, a shrewd appraiser of character and a keen recorder of an indecisive generation.

Most of Mr. Roth’s protagonists are, like Neil Klugman, adrift in a limbo between past and present. The author seems to know his people inside and out, whether he writes of a boy arguing the Virgin Birth with an exasperated rabbi, (‘The Conversion of the Jews’), or, in ‘Eli, the Fanatic,’ of a young Jewish lawyer trying to explain suburban mores to the leader of a rabbinical orphanage, or, in ‘Epstein,’ of the ludicrous yet pitiable aftermath of an aging man’s search for love. These stories, though concerned with universal, archetypal experiences, are somewhat transmuted into that which is at once strange and familiar. ‘I’m a Jew,’ one character says. ‘I am different. Better, maybe not. But different.’ “