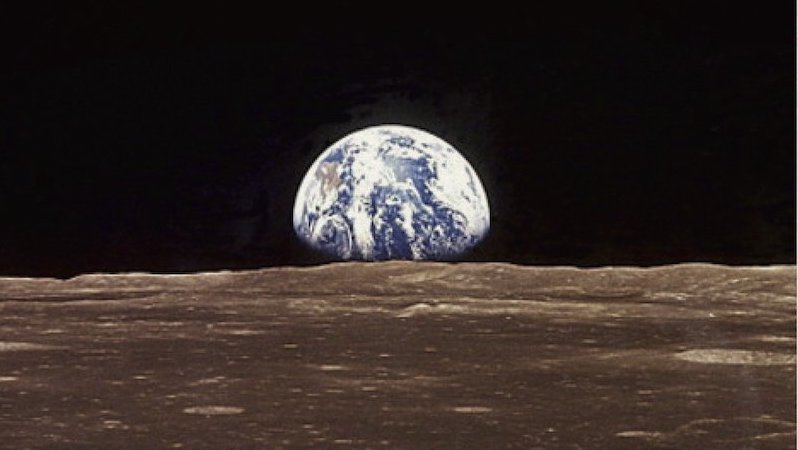 With the 50th anniversary of the Moon landing just a few weeks away, The Atlantic‘s James Parker brings us an exuberant essay on Norman Mailer’s Of a Fire on the Moon—the controversial author’s collected reflections on the Apollo 11 mission. “This is the glory of Of a Fire on the Moon,” writes Parker, “the fidelity of [Mailer] to his apprehensions; his space-operatic heebie-jeebies; his perverse, obsessive sense that under the achievement, something is dying.”

Over at the New Republic, Sarah Jones considers Miriam Toews’ Women Talking—the story of a group of Mennonite women, gathered together to envisage a new life for themselves in the wake of a string of horrific assaults perpetuated by the men of their community: “By fictionalizing a real horror, Toews opens the story up, and moves it from being a simple dissection of power—who wields it, and how it hides the worst sins—to an altogether more radical place.”

Meanwhile, in the pages of the New Yorker, Caleb Crain wrote a fascinating piece on James Polchin’s history of gay panic and persecution in America, Indecent Advances: A Hidden History of True Crime and Prejudice Before Stonewall. “The subject matter doesn’t make for light reading; Polchin admits to feeling ‘haunted’ by what he discovered in archives,” Crain details, “But it’s impossible to understand gay life in twentieth-century America without reckoning with the dark stories.”

We’ve also got Tim Adams of the Guardian on Nobel Prize-winner Svetlana Alexievich’s “unflinching and unforgettable” Last Witnesses: The Oral History of the Children of World War II (“Recollections of unimaginable terror—of the bombing and desolation that left 15 million civilians dead—are told in a kind of relentless clamour, each voice given its due”), and Elizabeth Nicholas’ New York Times review of Juliet Escoria’s autofictional debut novel, Juliet the Maniac (“Self as trauma is evident in the novel’s bones. Reading her staccato, impressionistic fragments is like mainlining chaos”).

“Whatever caricatured perceptions a reader may have of religious women—especially when those women are housewives in modest, religious dress—Toews’s novel overturns. Mennonite women come to full and fearsome life in Molotschna; brilliant and angry and quick-witted, impossible to ignore or diminish. They wear the head coverings and loose, modest dresses of Old Order Mennonites, they inhabit a sexist community, and they have survived heinous crimes. But the women underneath the bonnets are still women. They are not props, and their clothes are not costumes. Toews reminds us of this by telling little of the violence that drove the women to meet. She tells us, instead, of the quiet revolution they orchestrate … By fictionalizing a real horror, Toews opens the story up, and moves it from being a simple dissection of power—who wields it, and how it hides the worst sins—to an altogether more radical place. She recasts the first judgment. When God cast Adam and Eve out of Eden, he reserved special punishment for Eve. She would have pain in childbirth, he said, and she would desire her husband, but he would rule over her, always. But not this time. ‘I won’t be buried in Molotschna,’ an old woman tells Ona. ‘Help me into a buggy now and I’ll die on the trail.’ There is freedom, somewhere out there. There is an end to dominion. Eve did not find it, but maybe her daughters will.” 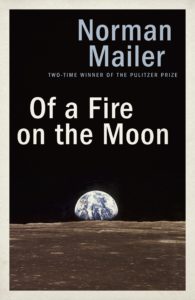 “Of a Fire on the Moon, the cosmically sprawling monograph into which the three mega-installments of his Life report were collected, is an utterly idiosyncratic take on the moon landing. It’s Mailer through and through, Mailer all over: quite as bonkers and deliriously tasteless as An American Dream, more bloated with prophetic wind than Advertisements for Myself, exceeded only by Ancient Evenings in its level of numbing physical detail. These are all compliments, incidentally. Because as always in the Mailer-verse, the dross and the gold are whirled together … The power of the launch astonished [Mailer]. But he was full of misgivings. His hairs were prickling. What if this whole thing was ‘a work of art designed by the Devil’? The multi-tiered technocracy of Houston offended him; the astronauts themselves, with their ‘personalities of unequaled banality and apocalyptic dignity,’ he found unreadable. To know space, to dominate space, to print the steps of men upon that tidal magnet and ancient mistress of madness, the moon—surely it was the sheerest hubris. It was White Anglo-Saxon Protestantism run mad. And [Mailer] hated WASPs … This is the glory of Of a Fire on the Moon—the fidelity of [Mailer] to his apprehensions; his space-operatic heebie-jeebies; his perverse, obsessive sense that under the achievement, something is dying. Plenty of people regarded the moonshot as a monstrous misallocation of resources. [Mailer] alone—or alone in mass-market magazines—was ready to declare it a metaphysical catastrophe … moon madness goes deep, and it has its own schedule. And only Mailer, standing athwart the current with his bandy boxer’s legs and his pressing financial needs, was prepared to think about it. His book sits there, lodged in 1969 like a probe—awkward, driven below the surface, blinking its signal into the future.” 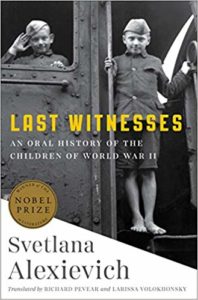 “As anyone who has ever tried to transcribe interviews knows, there is a sort of omnipotence to the process, cutting and arranging while staying faithful to the quoted words. The recollections of survivors or those living with grief are different to other voices in this regard. The traumatic experiences they describe have long been in the retelling as the brain tries to hold them in the frame of normal human experience. Their contours have been smoothed and polished over lifetimes, like stones turned over in old pockets. The trick, then, is to listen for the telling detail, knowing where to begin and what to leave out. Alexievich’s ear seemed uncannily pitch-perfect in this regard. She knew what resonated … Last Witnesses, like all of her books, works by accretion. There are more than a hundred accounts of childhood, each told with a familiar, blunt poignancy. Recollections of unimaginable terror—of the bombing and desolation that left 15 million civilians dead—are told in a kind of relentless clamour, each voice given its due … It is tempting to compare Alexievich’s work to that of the great oral historians, such as Studs Terkel—a closer cousin is John Hersey’s indelible account of the survivors of Hiroshima—but there is a special sort of clear-eyed humility to her reporting. She apparently gets entirely out of the way of her subjects and lets them do all the telling. She resists any editorial comment. Her only preface here is a pointed quote from Dostoevsky asking if ideology, revolution, war, ever justifies the tears of even one child. Alexievich’s life’s work, as an attentive listener to all the collected sorrows and stubborn survival of her homeland, quietly, unflinchingly and unforgettably serves to answer that question in the negative.”

–Tim Adams on Svetlana Alexievich’s Last Witnesses: The Oral History of the Children of World War II (The Guardian)

“Adolescent girls operate under at least two pernicious mythologies: first, that the content of their lives is unserious (crushes! cosmetics! curfew!), and second, that there is a related cap on their potential to suffer. Popular culture tells them that they will endure, at most, romantic yearnings for doltish boys, or the double-binding shame of being called either undesirable or a slut. Whatever capacity for darkness these conditions might allow, both the conditions and the capacity exist to be outgrown. From Plath to Didion to Ottessa Moshfegh, a small yet powerful cadre of women have deployed their literary talent to push back against these myths, dignifying female adolescence with unsparing darkness, and excoriating the gaslighting that leads teenage girls to believe there is something wrong with them if their souls are not half-size. Juliet Escoria’s autofictive debut novel, Juliet the Maniac, is a worthy new entry in that pantheon of deconstruction … Juliet’s level of general intensity can make Martin Amis characters read like prudes … But Juliet is no depravity fetishist. Her external intensity stems from a greater intensity within. Dissociation, mania, hallucinations and voices stalk her around house parties and biology classes. Her trauma, she explains, is herself … Self as trauma is evident in the novel’s bones. Reading her staccato, impressionistic fragments is like mainlining chaos: Juliet’s life has not been polite enough for chapters … Juliet’s ‘dark thing’ never recedes for good. But her balance of attention shifts as she expunges her past, an accelerating collection of light cracks piercing the dark. The resultant beauty is not without its complications, but it is as dazzling as Juliet’s world during one of her better hallucinations and the furthest thing from myth.”

“For most of the twentieth century, it was widely believed that ‘normal’ men sometimes reacted to a homosexual invitation with lethal violence, and the claim of ‘indecent advances’ figured so often in reports of murdered gay men that the hazard of such violence was one of the few things that many heterosexuals knew, or thought they knew, about gay life. To shed light on these killings, the social conditions and psychological conflicts that gave rise to them, and the manipulative and sensationalist coverage that they often received in the press, the cultural historian James Polchin has written Indecent Advances, a grisly, sobering, comprehensively researched new history. The subject matter doesn’t make for light reading; Polchin admits to feeling ‘haunted’ by what he discovered in archives. But it’s impossible to understand gay life in twentieth-century America without reckoning with the dark stories … It’s easy to see how convenient the notion must have been to defendants, but it also would have been convenient to conservative elements in society who wanted to keep gay men in a state of fear, analogous to false claims of black-on-white rape that long contributed to threats of lynching and to the suppression of civil rights … What the critique of the homosexual-panic defense, from ONE magazine to Polchin, suggests is that there can be a dark collaboration between an individual’s rage, whatever its psychological origins, and the license that a society extends, tacitly or openly, to its expression, and that politics may be the only way to bring this collaboration into the light.”

–Caleb Crain on James Polchin’s Indecent Advances: A Hidden History of True Crime and Prejudice Before Stonewall (The New Yorker)