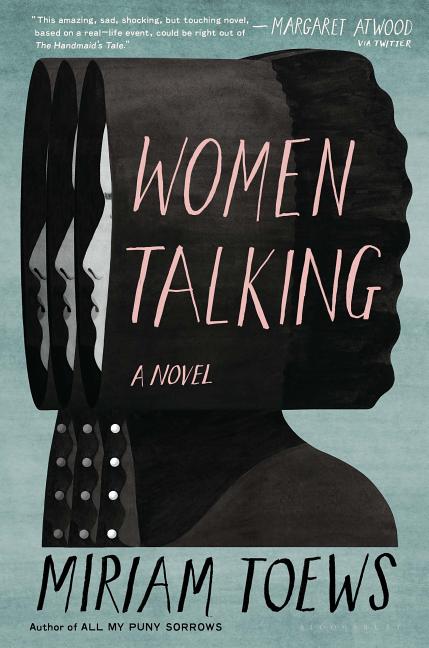 The latest from the bestselling Canadian author features eight women living in an isolated Mennonite colony in Bolivia, where they and other women and girls have been violated in the night for two years by what the men in the colony say are demons. But when they discover their violators are actually those same men, they must decide whether to leave the only home they've ever known and enter the unfamiliar world outside.

What The Reviewers Say
Rave LILY MEYER,
NPR
... astonishing ... Despite the beauty of Toews' prose and the constant, delicate humor of August's self-effacing perspective, I resisted [August as the narrator], and by extension the novel, for as long as I could. Why, I kept thinking, is a man telling this story? Why can't the women tell it themselves? But soon I understood: Women Talking reverses the patriarchal structure under which these women live. Until this moment, intellectual discourse in Molotschna has been reserved for men. Now, women's ideas are the center, and they get to make a man write them down ... though Toews' writing is simple and often funny, her ideas are difficult in the extreme ... Toews' emphasis on names and definitions serves to highlight how precise her own writing is, and how smart. The intelligence on display in Women Talking is as ferocious as it is warm. Women Talking is a profoundly intelligent book. It is an indictment of authority and a defense of belief.
Read Full Review >>
Positive Jennifer Reese,
The New York Times Book Review
... scorching ... Women Talking is a wry, freewheeling novel of ideas that touches on the nature of evil, questions of free will, collective responsibility, cultural determinism and, above all, forgiveness ... [The womens'] conversation is loose, unpredictable, occasionally profane and surprisingly funny ... By loosening the tongues of disenfranchised women and engaging them in substantive dialogue about their lives, Toews grants them agency they haven’t enjoyed in life. By refusing to focus on the crimes that launched this existential reappraisal, she treats them as dignified individuals rather than props in a voyeuristic entertainment. The only problem with this approach is that the grotesque and bizarre crime wave that launches the narrative remains all but unfathomable. It looms in the background, begging to be dramatized and explained. You don’t need an appetite for the salacious to want to know how a handful of men could rape dozens of women in a close-knit community, year after year, undetected. And you can appreciate this smart novel of ideas while also wanting to know how the women might have felt about this profound and intimate betrayal even before they started talking.
Read Full Review >>
Positive Ron Charles,
The Washington Post
This is fiction as deliberation, and yet it feels packed with drama. It also feels infused with a deeply sympathetic understanding of the way women talk — a subject that has drawn the attention of scholars as diverse as Luce Irigaray and Deborah Tannen. Toews captures the Mennonites’ antique way of speaking, a language thick with biblical tropes and Christian ideals challenged by the obscenity of what has been done to them ... Toews conveys not only what these women suffered but how stoically and graciously they endure ... Though Toews remains frustratingly unknown in the United States, she has long been one of my favorite contemporary authors. The compressed structure of Women Talking makes it unlike her earlier novels, but once again she draws us into the lives of obscure people and makes their survival feel as crucial and precarious as our own.
Read Full Review >>
See All Reviews >>
SIMILAR BOOKS
Coming Soon

The Magnolia Palace
Fiona Davis
Rave
What did you think of Women Talking?
© LitHub | Privacy