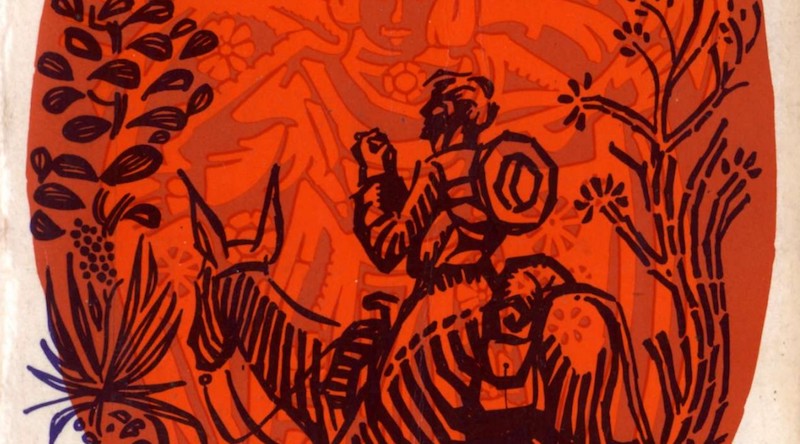 Willa Cather's Death Comes for the Archbishop at 90 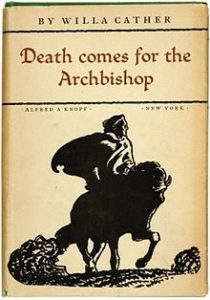 Men travel faster now, but I do not know if they go to better things.

“A new book by Willa Cather constitutes the literary news of the month. When she gave us My Mortal Enemy a year ago, it was apparently in the mood of experimentation, an essay in condensation. Now she is experimenting again but with a different view. She is attempting the final achievement of realism, in creating a novel that can with difficulty be distinguished from biography.

Death Comes for the Archbishop is the story, not of death, but of life, for Miss Cather’s Archbishop Latour died of having lived. She is concerned, not with any climactic moment in a career, but with the whole broad view of the career. There is no climax, short of the gentle end.

A man, in this case a saintly man, lives; works; meets other human beings and affects them for good or ill; dreams; and dies. That is the way of life, in which the crises are rarely labeled and recognized at the time, but are perceived only long afterward in retrospection. 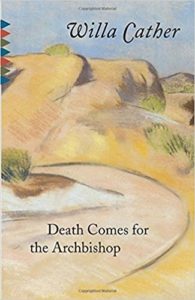 “It is not the way of most fiction, which finds it necessary to accelerate the tempo, crowding its action into the brief periods of critical importance, whose significance the reader is permitted to see by an assumption of God-like omniscience.

Telling the story of a life in the manner of life itself spoils, of course, almost all chance of making the story exciting. Not even the most eventful of lives are exciting for more than a moment or two at a time. Many readers with jaded appetites, it may be feared, will read all the way through this book with a continual sense of frustrated expectancy — disappointed because so little seems to happen.

Really, a great deal happens. There is danger, heroic courage, successful achievement, strange and challenging experiences, but all are related in the low key of a life-long perspective. It is a book delicate beyond belief; fragrant and shadowed.

For setting, Miss Cather has gone back to that old and mysterious New Mexico whose fascination led her to make an almost fatal digression from the proper scene of The Professor’s House. She tells of the first Bishop of Santa Fe, raised to a vicarage when the United States acquired the territory from Mexico an separated the people by a political boundary from their old church capital in Durango. 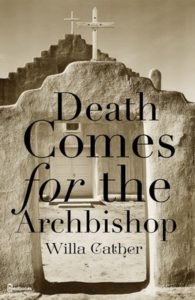 “Long before, they had been even more effectually separated by the desert, and in their isolation their religious practice had become sadly corrupted by increments from the ancient native superstitions.

To assert authority over this vast territory with its half-wild inhabitants, its traditions of paganism, and its jealousy of interference from Rome, was recognized as an arduous task and a dangerous one. The man chosen was Father Latour, a French missionary priest who had proved his hardiness by his work in the wilderness of Canada and Ohio.

There is no Bishop Latour of Santa Fe in church history, yet so finely is the portrait drawn the one has the constant sense of reading biography. It seems incredible that so complete a man could be contrived by art.

If anything could dispel the perfect illusion of reality, it is the perfection of the character presented. Bishop Latour is  saint; more nearly the living exemplar of his beloved St. Francis than any mortal is expected to be. Unswerving in his duty, he is yet gently and forbearing; slow to press the issue against priests that had fallen into abhorrent ways, he has a courage equal to any danger or threat when he has taken his stand. 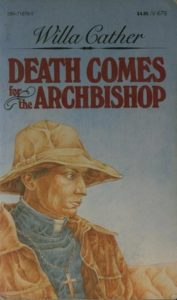 “If he has any weakness of ambition, that the author lets us see, it is his life plan to build a noble cathedral. And this culmination of his work, he is permitted to see.

It is a peculiarity of this novel that it has no woman character of consequence. There is no spice of love-interest, except it be the love of a great and good man for humanity. Yes, and a love of a man for his friend. For his vicar in the desert outpost, Bishop Latour took with him his boyhood friend, from the same village seminary in France.

If Bishop Latour is a little too saintly to be always practical, Father Jean has a way with practical problems that is adequate for them both. It is he who deftly suggests to rich communicants their opportunity to do generous things by the men of God. He is sent here and there, over the whole Southwest empire, subduing rebellious and fleshly pastors, carrying the Church into remote camps, fighting a war that is for him, always exciting, always adventurous. 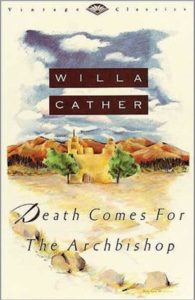 “Kit Carson steps into some of the pages — for Bishop Later touches everybody in his domain. There are magnificent pictures of the old, old pueblos; adventures with the carefully concealed but surviving religion of the Indians; the whole panorama of a developing empire.

Read the book. Read it leisurely, for it withholds its fragrance from those who run. It is a noble contribution to the fine body of contemporary writing.”