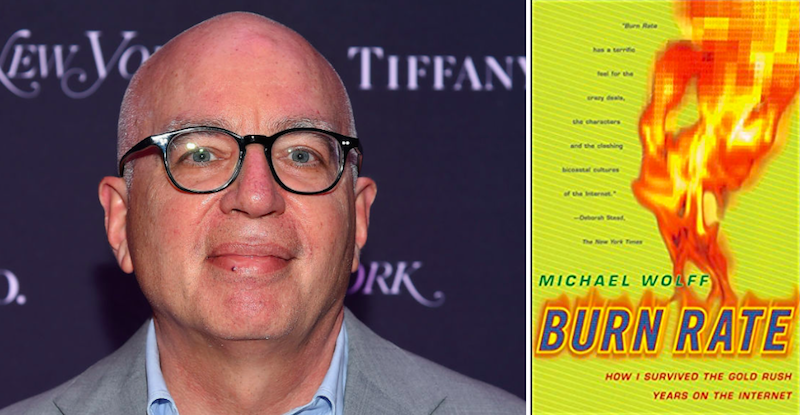 What the Critics Wrote About Michael Wolff's (other) Most Infamous Book

A look back at some of the first reviews of Burn Rate, the book that put Wolff on the map

Fire and Fury—Wolff’s explosive insider account of the gangrenous, gossipy shitshow that is the Trump White House—has been flying off the shelves in book stores across the country (yay! January cash injection for indie booksellers!). According to Stephen Rubin, Henry Holt’s president and publisher, the book “set off a historic rate of sales velocity driven by consumer demand for books across all formats, including physical hardcovers, e-books and audiobooks.” With 1.4 million hardcover copies on order, they literally cannot print these things fast enough.

Beyond the record-breaking sales figures, publicity around Fire and Fury and its controversial author has been damn-near relentless over the last week, sparked in no small part by Donald Trump’s laughably unconstitutional attempt to block the book’s release.

For those of you who are hungry for even more of this sort of thing, and curious about the critical reception to Michael Wolff’s (pre-2018) most infamous book, here are some of the initial responses to Burn Rate (1998), a scathing tell-all account of the early days of the dotcom Gold Rush, and of Wolff’s attempts to secure funding for his startup company, Wolff New Media. 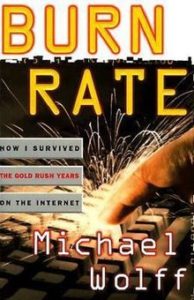 “The narrative follows a series of meetings, with the occasional business-class flight thrown in for good measure. In less capable hands, such a book would hold little appeal for the average reader. But Wolff, a nimble writer with a knack for spotting colorful details, moves the story along at movie-of-the-week pace.

“Wolff makes it clear that in this business principles are often cast to the wind. And he himself is no exception. The most astonishing illustration of this comes halfway through the book, when he and his lawyer, Alison Anthoine, who is also his wife, strike a lucrative deal with a computer magazine publisher whose executives are so eager for a slice of the Internet action that they fail to see that they are paying handsomely for what amounts to nothing. Wolff and Anthoine are only slightly contrite at their caper. In fact, they seem to congratulate themselves for having got away with something so bold.

“Wolff spares no feelings. He casts such an unforgiving eye on the people around him that his tone often smacks of vendetta. He depicts his cohorts as fakes and blowhards, arrogant and clueless. He is locked in a hate-hate relationship with one of his main investors, who Wolff believes is out to double-cross him. Wolff portrays his partner as a wealthy, simpering venture capitalist wannabe, and makes disagreeable sport of deceiving him. It is this dark figure who eventually strips Wolff of control of his own company.

“Ultimately, Wolff failed as an entrepreneur. He left a stack of unpaid bills behind. One of his three public relations companies sued him to recover the money. He now writes a column in The Industry Standard, a new business magazine focusing on the Internet, in which he rails against the industry, including the public relations firms that did not get him sufficient ink. So Wolff has gone out and produced some ink of his own.” 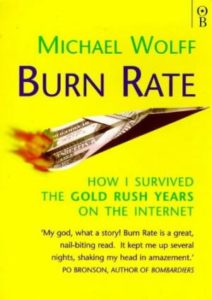 “Using the sometimes rough, sometimes scatological style of a journalist, which he is, Mr. Wolff has written a painful and funny story of how he started out as a digital revolutionary, tried to transform himself into a respectable candidate for an initial public offering, then ended up about where he started.

“A sharp and observant writer, Mr. Wolff makes the most of the ironies and human frailties that litter this corporate Pilgrim’s Progress, many of them his own.

At one point, Mr. Wolff marvels that one company to which he has sold a product genuinely believed it had bought the Internet rather than a randomly assembled database of Web sites. ‘In the age of the Internet, many Brooklyn Bridges will be sold,’ he reflects.

“Burn Rate works as a business book as well as a human story. Among a welter of breathless books about the wonders of the digital economy and how it will transform business as we currently experience it, Burn Rate is one of the first to bring cyberspace back down to earth.”

“Beyond a few quibbles, Burn Rate is the most compelling business narrative since the Michael Lewis description of real life on the wild side in Liar’s Poker: Rising Through the Wreckage on Wall Street. Mr. Wolff’s story serves as a provocative guide for anyone trying to make sense of the Internet’s turbulent history. What is more, studded on almost every page are business lessons that are all the more poignant for the painful experience they represent.” 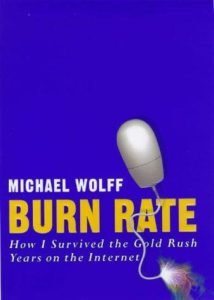 “Wolff is a strong, self-deprecating, and often humorous writer. He relates his own experiences with financial backers, venture capitalists, investment bankers, and some well-known Internet names. This is interspersed with some hyperhistory of the ‘net,’ circa 1994 through 1997. The book reads like a novel (a good thing), but in that sense the conclusion of Wolff’s story is a bit of an anti-climax (I won’t reveal details). Still, you won’t often find a first-person account of starting a business in the fast lane that so provocatively reveals the voraciousness, duplicity, and plain old hardball tactics that are the province of the financial types who keep capitalism humming. When the sky is the limit and a company’s financial reserves will only last a matter of weeks, it makes for some hectic action.” 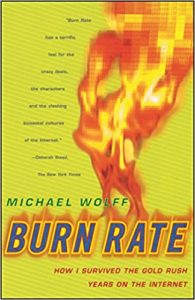 “About two-thirds of the way into Burn Rate, Michael Wolff’s sardonic tell-all about his failed attempt to become an Internet multimillionaire, the author pauses to ask himself a set of questions I had been wanting him to address for 150 pages:

How many fairly grievous lies had I told? How many moral lapses had I committed? How many ethical breaches had I fallen into?

Alas, it only sounds like soul-searching. Wolff relishes the many deceits and indiscretions he commits in his pursuit of Internet riches and, after this brief hiatus, he redoubles his efforts to hoodwink the financier-partners he believes are out to swindle him.

Burn Rate, currently all the rage in Silicon Valley and on Wall Street and excerpted in the June Wired to wide acclaim, deserves our attention for its panoramic treatment of the Internet’s boom years and its pus-ugly picture of the get-rich psyche. But Burn Rate will attract the majority of its readers because its message—The Internet Has Failed Us—panders to the current consensus.

Delicious dish, but watch out for the aftertaste. Wolff exploits the human tendency to confuse frankness and cruelty with truth-telling. And by repeatedly reminding the reader of what a dishonest, scheming little shit he is, he seeks to inflate his credibility. A real liar wouldn’t tell you that he’s a liar as Wolff does, would he? The wealth of verbatim quotations—constituting a good third of this book—also enhances Burn Rate‘s verisimilitude. But should it? Wolff writes that he jotted down bits of dialogue on his legal pads during meetings while others composed to-do lists. Not to accuse anyone of Stephen Glassism, but I’d love to see Wolff post those copious notes on his promotional Web site.”