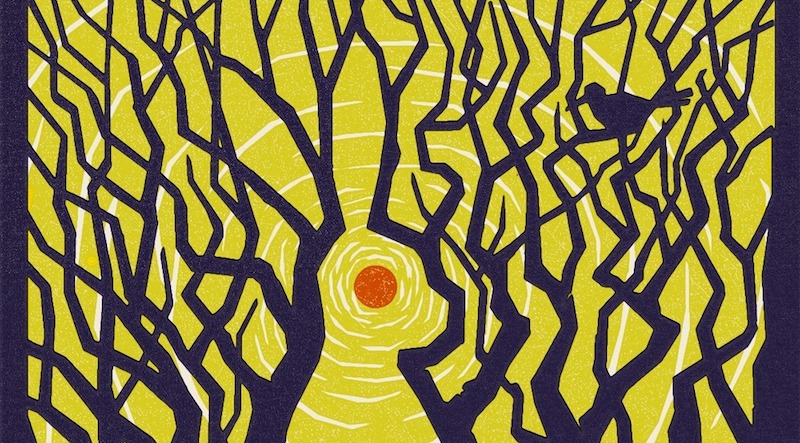 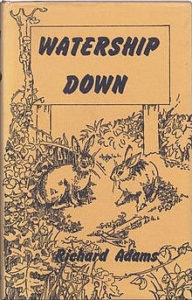 “Be cunning and full of tricks and your people shall never be destroyed.”

“The impulse to make animals represent or incarnate human significances is of long standing in literature, going back at least as far as Aesop. For whatever reason, English literature has for scene time been especially lavish in the granting to animals of human properties: speech, humor, moral values, histories. One distinction of this kind of writing is that while it is mostly directed toward children, adults have enjoyed the best of it as much as children and sometimes more: Edward Lear and Lewis Carroll, surely, but also Kipling, A. A. Milne, Kenneth Grahame, even Beatrix potter.

I doubt that Richard Adams’s Watership Down is really aimed at young children, despite his having said that it arose from impromptu stories he used to tell his small daughters. I can’t imagine many readers under 13 or 14, an age when the lines between juvenile and adult fiction begin to blur, having the patience and grasp of extended allegorical strategies to persevere to the end of a 426?page epic about a community of rabbits. And while older teen?agers may well enjoy it, I suspect that this tour de force, the Iliad and Odyssey of Oryctolagus cuniculus, is going to find its true audience mainly among the people who have made a cult of Tolkien, among ecology?minded romantics and all those in need of a positive statement, not too subtle but not too blatant either, about the future of courage, native simplicity, the life?force, and so on.

I don’t mean to be condescending. Watership Down is in some ways a delightful book, at times an affecting one. But faced with the extraordinary praise given the book in England, one has to draw back some distance. Lacking the high wit and imaginative force of Alice in Wonderland or the triumphant (if occasionally purple) lyricism of The Wind in the Willows, the book seems to me a good deal less than the ‘classic’—with the implication in the word of settled universal appeal—that British commentators have so reflexively proclaimed it. 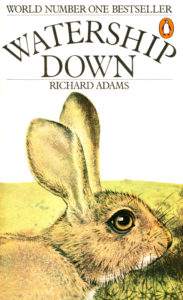 “As in all such fiction, the plausibility issues from the detail and consistency with which the animal life is rendered, and above all from the resemblances we can discern to aspects of our own lives. To this end Adams offers a remarkable wealth of information on rabbit existence and wisely concentrates on matters of sustenance, living arrangement, behavior toward other animals, and the like.

“But as anthropomorphic fantasy replaces observation (the book is in an actual area of Berkshire, England, and Adams is particularly fine on landscapes and flora, weathers and seasons) he sees fit to give rabbits a folklore and folk?heroes, a mythology complete with creationmyth and, finally, a language …  If I remember correctly, the great writers of animal fiction let their characters unselfconsciously speak the authors’ own languages, and this is proper because the imaginative act is complete once the literary decision has been made to allow animals to speak in words; to let them use their own worth, their own verbal language, is to tempt the pathetic fallacy beyond its acceptable limits. This may seem a small point, especially since the Lapine is a very minor element of the rhetoric, brit I think it symptomatic of what is wrong with Watership Down, or rather what keeps it from being

There is a subtle indecisiveness or doubt on Adams’s part as to just how convincing his fiction is. This is manifested partly by his tendency to do too much (the Lapine, the rabbit?myths) and also by the frequent occasions when he steps outside the narrative to serve for a moment as a naturalist … The point is that if you are going to anthropomorphize you had better do it all the way, relying on the pure inventedness of your tale, the same outrageous conceit which is at the back of the March Hare, Mowgli and Pooh, however differing their literary realities. 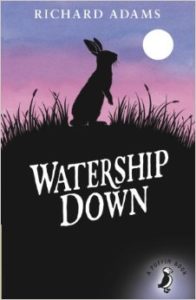 “It isn’t that Adams has sentimentalized his rabbits—the book is no Jonathan Livingston Seagull—but that the shadowy presence of man is almost always characterized by hint and threat of evil, a theme on occasion made wholly explicit.

‘Men will never rest until they’ve spoiled the earth and destroyed the animals,’ one of the rabbits says. And one of the quotations ranging from Aeschylus to Auden that preface each chapter and mainly serve to present human analogues to the events is this from Destoevsky: ‘Love the animals. God has given them the rudiments of thought and joy untroubled. Don’t trouble it, don’t harass them, don’t deprive them of their happiness, don’t work against God’s intent.’

Why, yes, who would quarrel with that except hunters? The point, though, is whether love of animals is best.served by a depreciation of the human. In the classics I have cited that is almost never present. It would seem that in Adams’s ardor for wild creatures he has tried too hard to make a case for them instead of allowing them fully to be their own recommendation. I’m grateful for much of what he’s done, but I’m not going to look at rabbits differently from now on, as several English reviewers said they would. I won’t see them as being any more like me than I did before; I’ll still regard them as representatives of a mysterious otherness, unable to penetrate the opacity of their gaze, a bit dismayed by their breeding habits, liking their bounding gait and glad of but not inspired by the fact that they exist.”